Shakib Al Hasan now has 3 five wicket hauls to his name in the shortest format of the game.

Veteran Bangladeshi all-rounder, Shakib Al Hasan, has joined the elite list of bowlers with most five wicket hauls in the shortest format of the game. Shakib, who is currently leading the Dhaka Dynamites team in the ongoing edition of the Bangladesh Premier League (BPL), scalped his third five-wicket haul in T20 cricket recently. Playing in the 24th match of the BPL 2017, Shakib Al Hasan returned with impressive numbers of 5/16 against the Rangpur Riders.

His effort now sees him being at the joint number 2 position in the list of bowlers with most T20 five-wicket hauls. Shakib’s three five-wicket hauls have come in 246 T20 matches. The Bangladeshi all-rounder is a globe trotter when it comes to playing in the T20 leagues.

He is one of the very few Bangladeshi cricketers who have managed to catch the attention of the franchises of the Indian Premier League. He has played for various teams across the different leagues. The list includes the likes of Dhaka Dynamites, Dhaka Gladiators, Karachi Kings, Jamaica Tallawahs, Barbados Tridents, Kolkata Knight Riders, Adelaide Strikers, Peshawar Zalmi and Bangladeshi national side as well.

Among the T20 big shots

Shakib Al Hasan joined South African all-rounder David Wiese and Australian all-rounder James Faulkner in the list. Both Wiese and Faulkner also have 3 five wicket hauls in T20 cricket. While Wiese has taken 155 matches for his feat, Faulkner has done it in 149 matches only. The table is topped by the Sri Lankan wizard pace bowler, Lasith Malinga. Malinga has 4 five-wicket hauls to his name in the shortest format of the game.

Talking about Shakib’s most recent effort, he ran through the Rangpur Riders middle-order and the lower order to scalp five wickets in 3.5 overs. He bagged the wickets of Mohammad Mithun, Shahriar Nafees, Ziaur Rahman, Sohag Gazi, and Rubel Hossain to complete his magical number. 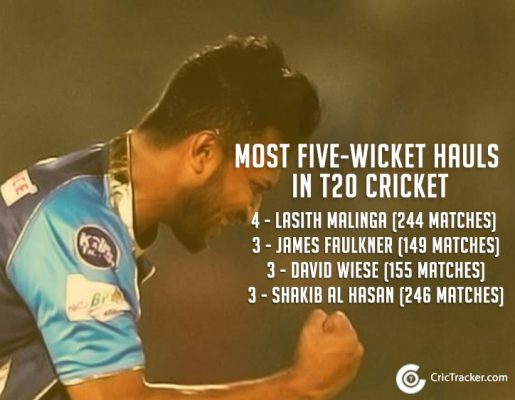