It would be wise to wait for the playing XIs to come before joining any contest in Fantasy leagues.

The 12th match of the Shpageeza Cricket League (SCL) 2019 will be played between Mis Ainak Knights and Kabul Eagles at the Alokozay Kabul International Cricket Ground.

The first game of the Shpageeza Cricket League 2019 on Sunday features the unbeaten Kabul Eagles up against Mis Ainak Knights. While Kabul has won all of its first three games, Knights aren’t too far behind as well with two wins out of three. Kabul’s captain, Asghar Afghan has lead his troops well. The former Afghanistan captain tops the run-scoring charts and is ably supported by Hazratullah Zazai and Samiullah Shenwari.

Although their form and morale bode well for them, their opponents are ones to be taken lightly. In spite of a small glitch in the previous game against Speen Ghar Tigers, Mohammad Nabi and his men will fancy their chances of inflicting a first defeat upon the home side.

This match is the final game for Kabul as they look to seal their place in the top two while the Knights have other ideas. With only a handful of games left in the league phase, both sides eye a crucial win to keep their hopes afloat and possibly make it to the Qualifiers.

Although this is a morning clash, the temperatures are expected to range between 20 and 24 degrees Celsius. The humidity, according to AccuWeather is slated to be around 24% while there is no threat of rain interrupting this game on Sunday.

The pitch is a high-scoring one with teams breaching the 150-run mark with relative ease. The spinners will have the main say as the game progresses while chasing is the least preferred option upon winning the toss with the record this year being heavily skewed towards putting a total upon the board.

Kabul Eagles rested some of their players in the previous game and a couple of them might return for this match depending upon the performance of the fringe players.

Ashgar Afghan and Noor Ali Zadran have started the season strongly with 133 and 123 runs respectively from three outings in the SCL this year. With the international experience they possess, they look good for more on Sunday. Similarly, Waqar Salamkheil has been crucial to the Eagles’ fortunes with six wickets so far and should get ample turn to exploits against the Knights 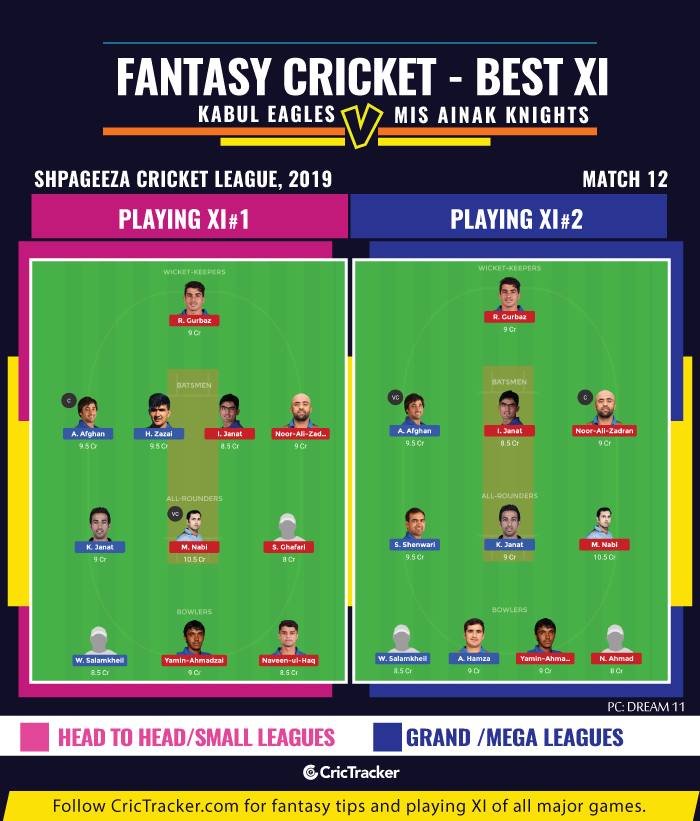 Mohammad Nabi is a decent option for captain or vice-captain with the Afghan International scoring a fifty in the previous game. His off-spin is also a genuine wicket-taking threat. Although he is priced at 10.5 credits, he is a must-have pick in the fantasy team.

It would be wise to wait for the playing XIs to come before joining any contest in Fantasy leagues. Generally playing XIs are out with 5-10 minutes to go before the start of the match.

Mis Ainak Knights look the more balanced side on paper and should register a win at the expense of Kabul Eagles.