Fast bowlers who are capable of bowling in the death have picked the bulk of the wickets in SCL 2019.

The 14th match of the Shpageeza Cricket League (SCL) 2019 will be played between Amo Sharks and Mis Ainak Knights at the Alokozay Kabul International Cricket Ground.

The first game on Monday in SCL 2019 pits Amo Sharks against Mis Ainak Knights in one of the most awaited clashes of the league. Both teams currently occupy two spots in the top four itself with two wins each. While the Amo Sharks come into this game on the back of a morale-boosting win against Kabul Eagles, Mis Ainak Knights look to spring back into winning ways in Kabul.
Both teams have ample international experience in their sides with the likes of Mohammad Nabi and Rahmat Shah featuring in this game. All eyes will be on young Ibrahim Zadran, who tops the run-scoring charts with 218 runs in just four outings. Along with Usman Ghani and Mirwais Ashraf, he has been the standout player for them.

Although they will fancy their chances of pulling off a win, they come across and equally strong Mis Ainak Knights side led by Mohammad Nabi. With a good bowling attack in their ranks, it should make for a good contest against the opposition batsmen who are in good form as well.

Morning games have experienced temperatures in the range of 17-21 degrees Celsius, which is the case on Monday as well. There is no chance of rain interrupting the game with the wind blowing in at 6 km/h during the match.

A traditionally high-scoring ground, the surface here should favour the batsmen with some spin also available for the tweakers to exploit. The small dimensions of the ground go against them with the average score here being 164 in the first innings.

Mirwais Ashraf has picked five wickets and also scored 60 valuable runs at a strike rate of 162.16. His form makes him a valuable asset to the Dream11 fantasy side. Similarly, Ibrahim Zadran is another standout player with 218 runs to his name.

His ability to pick wickets as well was evident in the previous game as he returned with figures of 3/42 to add more value to his skill-set. Rahmanullah Gurbaz hasn’t had the best of SCL but has already proved himself on the biggest stage and is certainly due for a big one on Monday. 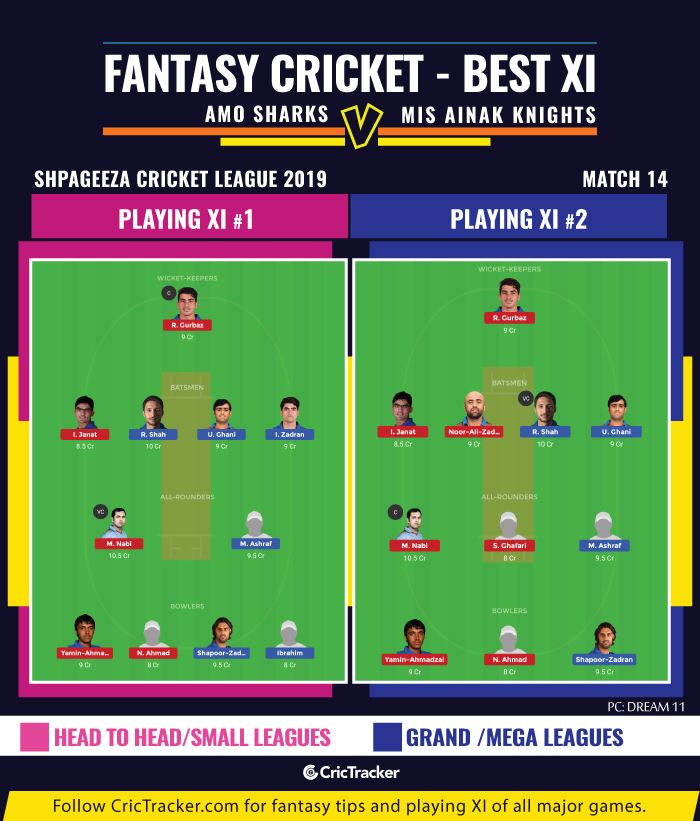 Fast bowlers who are capable of bowling in the death have picked the bulk of the wickets in SCL 2019. Hence, Yamin Ahmadzai and Mirwais Ashraf fit the bill and are safe punts for your Dream11 Fantasy team.

Mis Ainak Knights should come out victorious against the Amo Sharks