Samiullah Shinwari will be a perfect option to be considered as a captain or vice-captain.

The 5th match of the Shpageeza Cricket League (SCL) 2019 will be played between Kabul Eagles and Speen Ghar Tigers at the Alokozay Kabul International Cricket Ground.

The Kabul Eagles started off the season with a 36-run win over the defending champions Band-e-Amir Dragons in the tournament opener. Their skipper Asghar Afghan set the tournament on fire with a 48-ball 92 which included 8 maximums. His brilliant innings helped Kabul finish on 209/4 in their 20 overs. The BEAD team were six down for just 96 runs before some late striking could only bring down the winning margin of the Eagles.

The Kabul Eagles will be now up against the Speen Ghar Tigers on Wednesday afternoon match. Speen Ghar’s campaign started off with a loss against Amo Sharks. Each of the top four of the Sharks touched 25 as they ended up with 162/7 on the board. The Tigers kept losing wickets in the run chase and never looked like winning the game. They were eventually bowled out for 144 after playing 19.4 overs.

No interruption from the weather is expected for this game. The conditions are expected to be a little cloudy in the afternoon which won’t be bringing the rain.

A little dip in totals is usually seen during the matches played in the afternoon. The same happened on Tuesday where the pitch became slow by the 2nd innings. As a result, the Speen Ghar Tigers struggled to chase down 163. Same is expected on Wednesday in the game between Eagles and Tigers.

Tendai Chatara is set to join the Speen Ghar Tigers. He might be available for playing after a couple of days.

Najibullah Zadran has returned to batting low down the order which could harm his fantasy potential. Bahir Shah couldn’t make it to the playing XI in the last match. However, he is expected to get a go following his team’s failure with the bat. Kabul’s Waheedullah Shafaq is the younger brother of Speen Ghar captain Shafiqullah Shafaq. Both have got the ability to strike big with consistency being the only major issue.

Zahir Khan started off where he left in the previous edition. He took 2/20 in his four overs on Wednesday adding to his tally of 15 wickets from only six innings during the 2017 edition. Karim Janat opening the innings will make him bat in the best conditions and gets to bowl his full quota of four overs. Shahidullah Kamal is also crucial in the fantasy team due to batting at No.3.

Samiullah Shinwari bats at No.5 or higher for the Kabul Eagles and bowls full quota of 4 overs. He will be a perfect option to be considered as a captain or vice-captain. 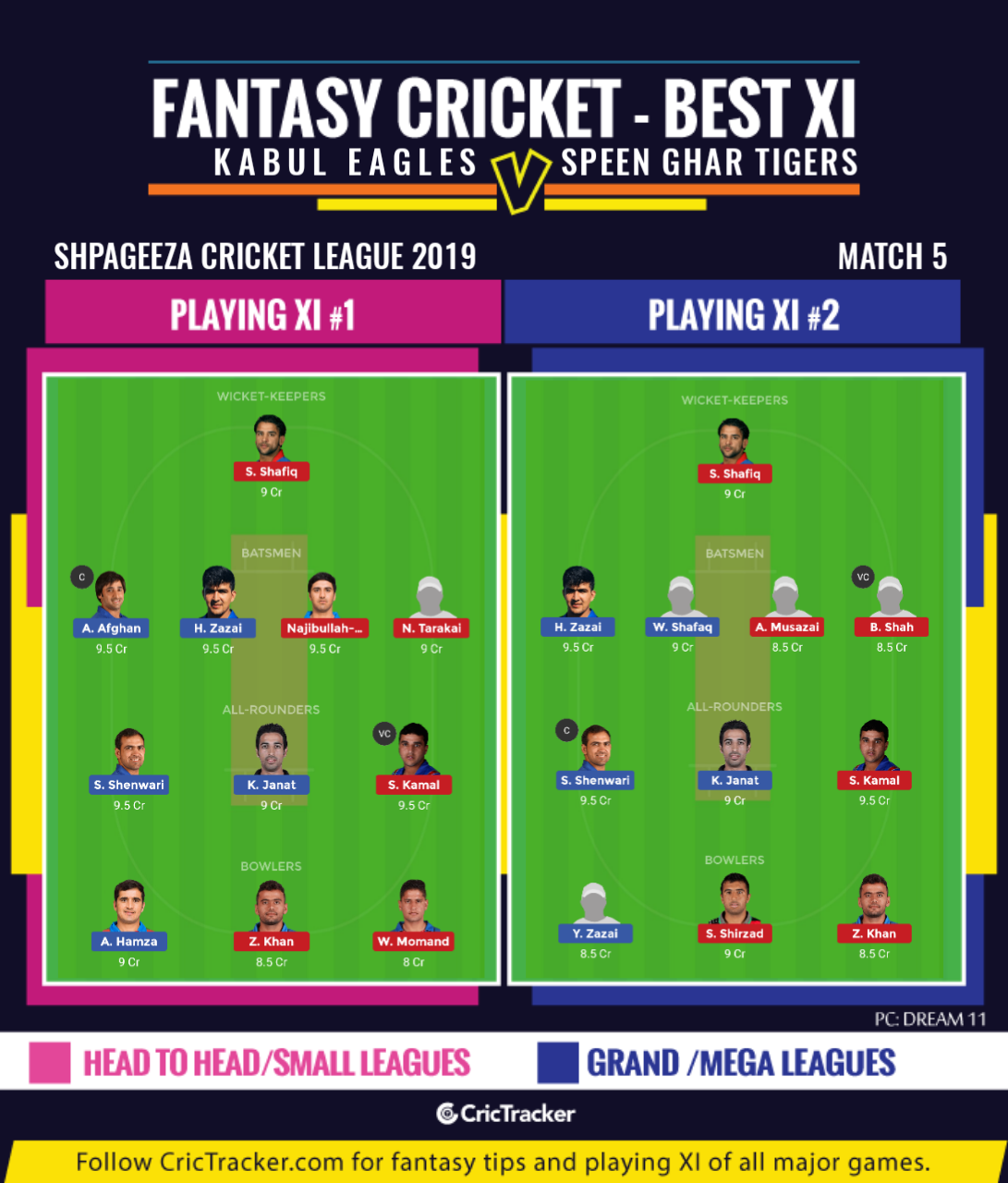 While Kabul Eagles fielded a near-perfect line-up, the Speen Ghar Tigers made surprising exclusions. Karim Sadiq and Bahir Shah missed from the first match. With the batting troubles in the previous game, Bahir could come into the playing XI.

The Kabul Eagles are expected to register their 2nd straight win of the tournament.