Though Brendan Taylor will be a popular choice as captain, one can also assign the role to Ibrahim Zadran.

The 8th match of the Shpageeza Cricket League (SCL) 2019 will be played between Amo Sharks and Boost Defenders at the Alokozay Kabul International Cricket Ground.

Amo Sharks and Boost Defenders are set to lock horns in the eighth match of the Shpageeza Cricket League. The Sharks, led by Shapoor Zadran, made an incredible start, defeating the Speed Ghar Tigers by 18 runs. Their top order put up a formidable 162 after which the bowlers got them home. But the Sharks couldn’t hold on to their good run of form versus the Band-e-Amir Dragons.

They got out for 120 and lost by seven wickets. In their next encounter, Zadran’s men are scheduled to face Gulbadin Naib’s Boost Defenders, who have got off to a pretty decent start in the T20 league. In their first encounter, they managed to get out of jail, winning by three runs versus the Mis Ainak Knights. Even versus the in-form Kabul Eagles, Naib and Co put up a decent enough performance.

The conditions will be healthy for cricket. There are no chances of rain with the clouds and the sun playing hide and seek throughout the duration of the match. The temperature will mostly be around the 18 degrees Celsius and 23 degrees Celsius. The humidity won’t be high with the numbers in the 20s.

The track in Kabul has turned out to be good for batting. But the bowlers have also had their say. It’s pertinent to note that chasing has been tough on the strip as the first five encounters went in favour of the team, batting first. Hence, it’s pretty clear what the sides should be aiming to do.

Brendan Taylor plays the role of an aggressor at the top and once he gets going, it’s a tough task to stop him. In the first match versus Mis Ainak Knights, he hit two fours and four sixes in his 19-ball 36.

Ibrahim Zadran has shown decent form of late in all formats, especially in T20s. The 17-year-old has 87 runs opening the batting for the Sharks with a top score of 62 against Band-e-Amir Dragons. 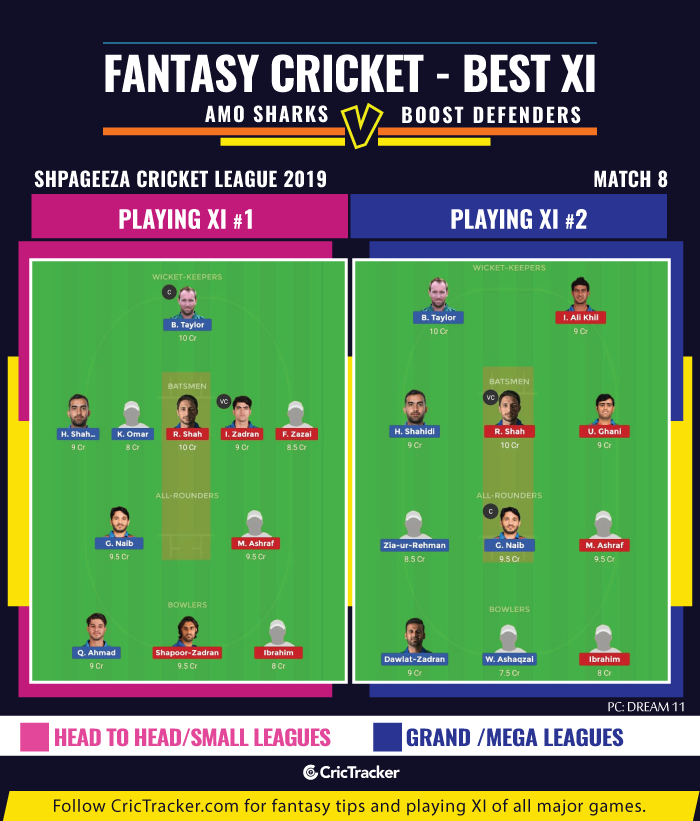 It will be advisable to pick more batsmen since the tournament has already produced some high-scoring games.

Amo Sharks are expected to come out trumps.