Shreyas Iyer: A mature captain and a malleable batsman

Shreyas Iyer: A mature captain and a malleable batsman

By showing his adaptability, both as the leader and as a batsman, Iyer has announced to the world that he is a man who can be trusted and a man whom we can bet our money on. 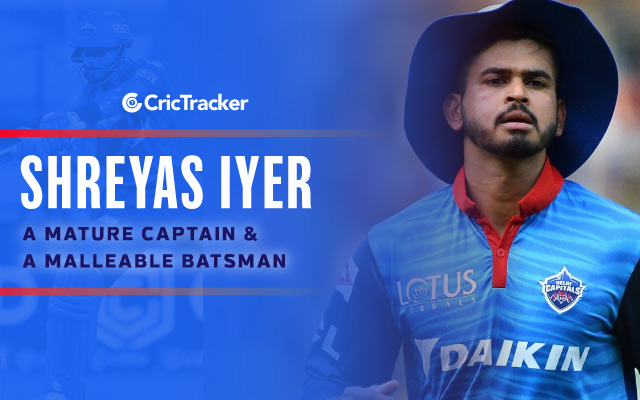 It was the grandest stage in the most sought after T20 league in the world. His team was precariously placed at 22 for 3 in the summit clash at one stage, and a collapse seemed imminent. But then, the skipper held the innings together, scored a fighting 65*, resurrected the innings, and helped his side to post a competitive total of 156 runs on the board. Yes, the Mumbai outfit romped home with ease in the final, but Shreyas Iyer and his side can take immense pride in the way they fought, not only in the match but through the course of the entire tournament.

What stands out in Shreyas as a leader is the maturity he displays. He is calm, makes calculated moves, and is not afraid to try the unconventional. In the second qualifier against Sunrisers Hyderabad, Iyer promoted Marcus Stoinis to open the batting. The Aussie had never opened in the season before, but Iyer was ready to take the gamble. The bulky Australian responded with a 27-ball 38 and put on an 86-run opening stand with Shikhar Dhawan, and sealed the match in favor of the Delhi side.

Even Australian legend and Capitals’ coach Ricky Ponting was effusive in praise of Iyer. This is what he had to say.

When the praise comes from a man who has led Australia to two World Cup victories, we better sit up and take notice.

Even with the willow in hand, Iyer has been malleable and has led from the front this year. In the table below, let us have a look at the top five highest run-scorers in the 13th edition of the IPL. 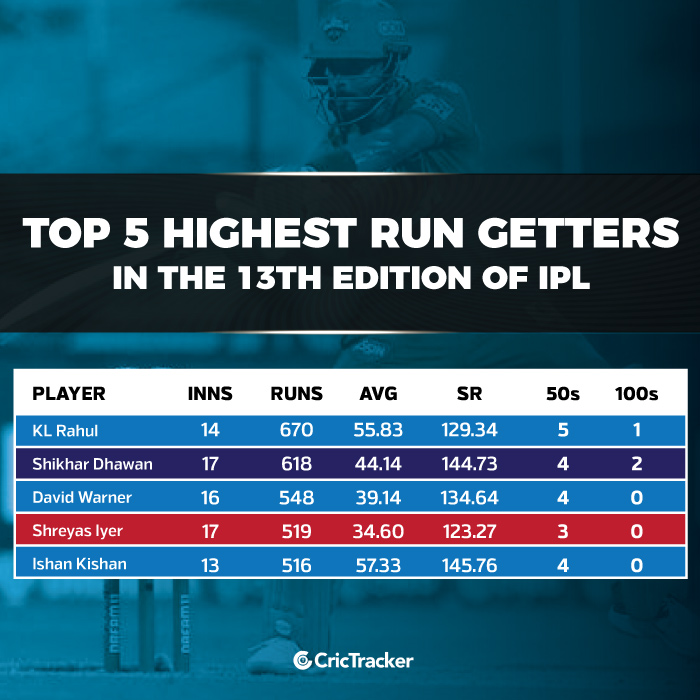 Iyer is the fourth-highest run-scorer in the 13th edition of the IPL. He has aggregated over 500 runs this season, and along with Shikhar Dhawan, has played a pivotal role in his side finishing as the runners up this year. Also, out of the 17 innings that he has played this year, he has crossed the 20-run mark on 11 occasions.

But more importantly, we need to analyze his three fifties, to understand how malleable Iyer has been with the willow this year. In the table below, let us have a look at the three fifties that Iyer has scored this year. 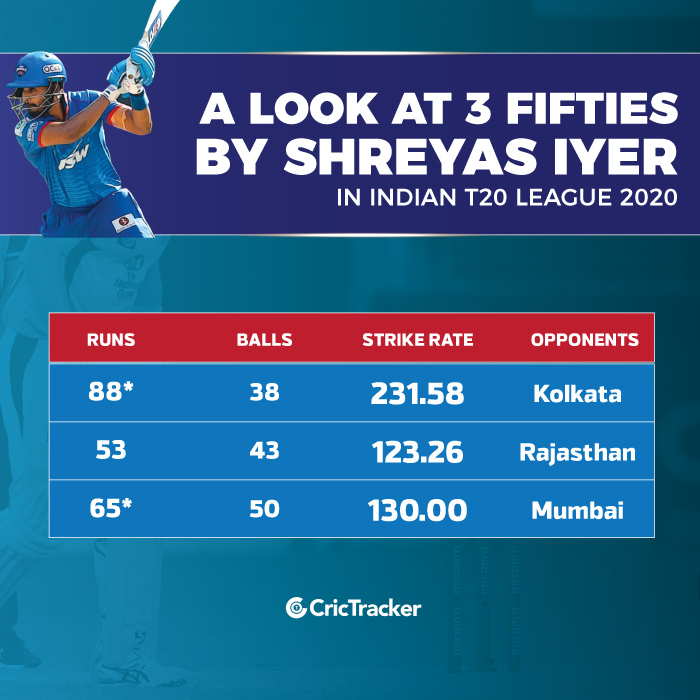 From the above table, we can see that there is a difference in a strike rate of more than 100 between Iyer’s fastest and slowest fifties this season. And therein, lies his dexterity to adapt to the situation. When Iyer scored his 38-ball 88, he came in after the openers had already laid a solid platform at the top. He came in with his side placed at 56/1 after 5.5 overs and carried on the momentum by taking the attack to the opposition. The Delhi skipper blasted 6 sixes and 7 fours in his 38-ball assault and helped his side to post a gargantuan total of 228 runs on the board.

As far as his slowest fifty is concerned, his side was in troubled waters after a raging Jofra Archer ripped through their top order. Prithvi Shaw was bowled off the very first delivery by a snorter from Archer, and Ajinkya Rahane followed him soon, to leave the Delhi side reeling at 10/2. Iyer came in, steadied the ship and put on an 85-run stand with Dhawan for the fourth wicket and helped his side to beat their opponents by 13 runs. Iyer stayed till the end of the 16th over and was the catalyst behind his side’s victory against the Royals.

And, even in the summit clash, the situation demanded that Iyer stays till the end, and that is exactly what the skipper did.

One for the future

By showing his adaptability, both as the leader and as a batsman, Iyer has announced to the world that he is a man who can be trusted and a man whom we can bet our money on. And, if he can continue in the same vein, he will lead the ‘Men in Blue’ to great heights in the years to come. Not only the Delhi Capitals who are clad in blue but even his national side as well.

Note: All stats have been taken from iplt20.com and Howstat cricket