Sean Williams will be a good option as captain or vice-captain given the role he is expected to play in this match.

The 1st match of the Singapore T20I Tri-Series 2019 will be played between Zimbabwe and Nepal at the Indian Association Ground in Singapore.

This game will be available on Fan code in India and will be streamed on Singapore Cricket’s Facebook page and YouTube channel.

Zimbabwe and Nepal will be touring Singapore for a T20I Tri-series starting on Friday. The three teams will meet each other twice between September 27th and October 3rd at the Indian Association Ground. Nepal and Zimbabwe will face off in the tournament opener which will be the first meeting in international of these two sides. It was Singapore who defeated Nepal for sealing their place at the Men’s T20 CWC Qualifiers to be played later this month.

Zimbabwe lost the chance after the Zimbabwe cricket was suspended by the ICC. They can take confidence from the win over Afghanistan in the T20I Tri-series in Bangladesh. That win brought an end to Afghanistan’s record winning streak in Men’s T20I cricket. Hamilton Masakadza ended his International career in the same match. Sean Williams will now be leading Zimbabwe for the first time in his 15-year career.

The tournament opener is likely to get a delayed start with the rain predicted till evening. The weather forecast looks better from 5 PM local time which is a positive sign.

The Indian Association Ground hosted the T20 CWC Asia Qualifier a couple of months ago. The games that were played in the morning had high scores and good chasing record. However, on used pitches, both the numbers saw a decline. This will be the first Men’s International game to be played under the lights at this venue. This could be a high scoring one with the chances of dew.

Ryan Burl has replaced Craig Ervine in the Zimbabwe squad.

Sean Williams will be a good option as captain or vice-captain given the role he is expected to play in this match. 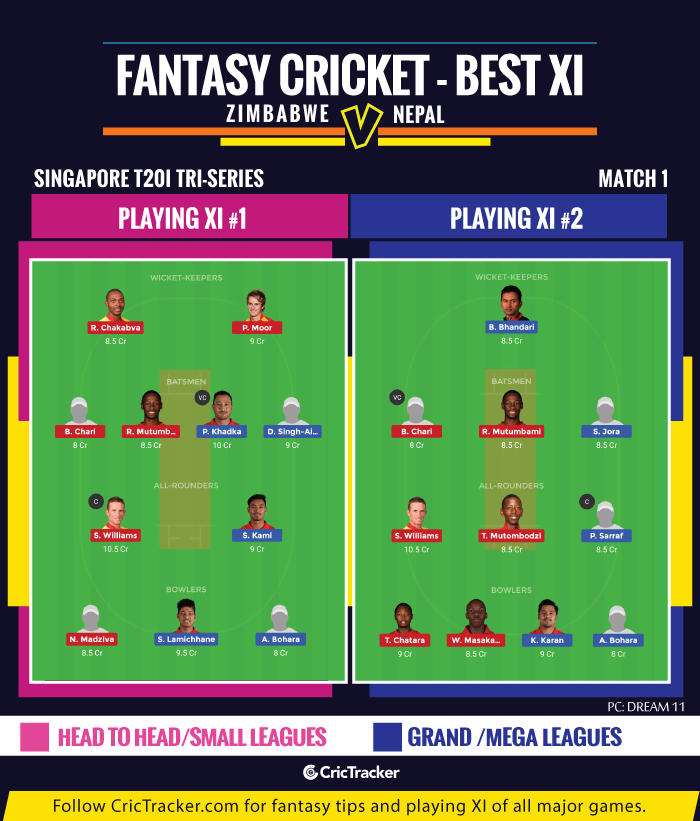 Sandeep Lamicchanne has been quite poor with the ball in the T20Is recently. His economy rate has become the 2nd worst for Nepal among the players who bowled at least five overs. Most of the Zimbabwe players have never played Sandeep which could help his cause. Moreover, the leg-spinner has performed well in the CPL which will give him confidence.

Zimbabwe is expected to start the tournament with a win.