The pitch has been becoming tough for the bowlers with every passing match.

The Singapore tri-series has been a riveting one thus far with all the three teams garnering one victory each. Nepal slumped to a five-wicket defeat versus Zimbabwe in their first match. But the team came back strong, beating the hosts by nine wickets at the Indian Association Ground. Paras Khadka’s 52-ball 106 scripted the victory for Nepal as they chased down 152 with 24 balls to spare.

Nepal and Zimbabwe are now scheduled to cross swords in the fourth match. Khadka’s men will wish to avenge their loss in the opening encounter. Zimbabwe, on the other hand, couldn’t get over the line versus Singapore after needing 12 runs off the last nine balls. Skipper Sean Williams’ quick fifty also went in vain. Zimbabwe will be looking to make amends and get a win under their belt.

The pitch in Singapore has become better with every game. Chasing has been an easier task thus far, though Zimbabwe missed out last time. Hence, chasing should be the way forward. There will be a couple of showers in the day, but nothing during match-time, though there will be a significant amount of cloud. The temperature will be around 29 degrees Celsius with the humidity in the 70s.

Nepal’s fortunes in batting will depend on skipper Paras Khadka, the leading run-scorer thus far. In the bowling area, Sandeep Lamichanne’s role will be crucial. The young leg-spinner caused a lot of troubles to the Zimbabweans in the first game, getting three wickets. Aarif Sheikh and DS Airee have a couple of impressive knocks. Nepal’s overall bowling has been bit of a disappointment.

Tendai Chatara missed the last game and he may comeback in place of Richard Ngarava, who gave away runs at over 12 in the previous match. Burl and Mutumbami couldn’t replicate their heroics from the last game. Williams and Regis Chakabva have looked threatening. Masakadza and Williams have economy rates under seven. Burl and pacer Neville Madziva have done reasonably well. 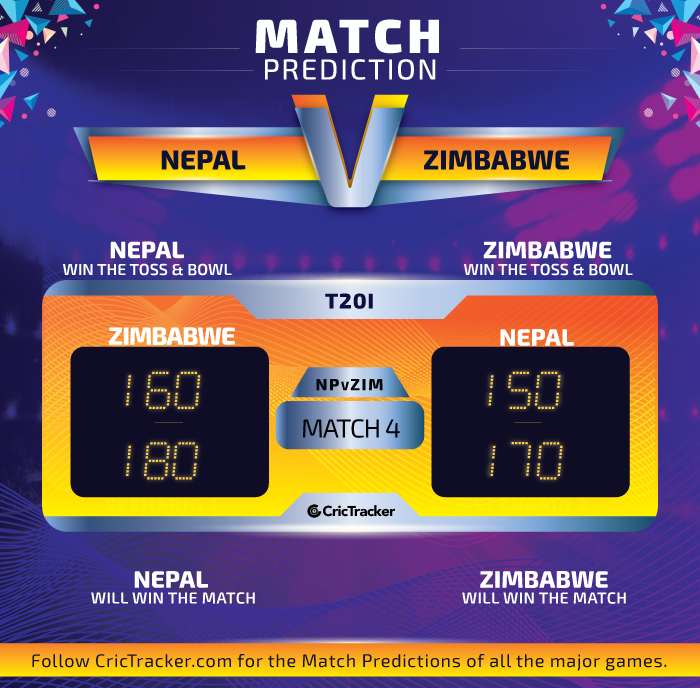