The hosts need to find a way of stopping Paras Khadka, who destroyed them last time with a 52-ball 106.

Singapore were blown away by Paras Khadka’s century in their first match at the Indian Association Ground. However, the hosts came back strong in their second match versus Zimbabwe, winning by a mere four runs. It was also the first time when Singapore beat a full-member nation. Tim David led them in the opening game after which their regular captain Amjad Mahboob made a comeback.

Their next encounter is against Nepal and this time they will be looking for a better performance. The home team needs to find a way of restricting Khadka, the opposition captain. Zimbabwe, on the other hand, had the chance of winning consecutive games. Sean Williams and Co needed 12 runs to get off their last nine balls against Singapore, but somehow failed to get over the finishing line.

The pitch will be good for batting and shot making isn’t expected to be much of a challenge. The spinners will have something in it for them though. There will be a slight chance of rain with over 90 per cent cloud cover throughout game time. The conditions will be humid with dew likely to play a huge part. Hence, teams will again be better off, electing to field first after winning the toss.

Tim David has been Singapore’s standout performer in the batting department. He has 105 runs at a strike-rate of 154.41 and has been dismissed only once. Surendran Chandramohan, Manpreet Singh and Rohan Rangarajan’s role will be key as well. A lot will depend on Mahboob and Janak Prakash in the bowling department. But they need support from the other bowlers, who have been indifferent.

It goes without saying that Khadka has to remain amongst the runs for Nepal to make it two out of two versus Singapore in the tri-series. Aarif Sheikh and Dipendra Singh Airee have to lend their skipper the support at the top. Tweaker Sandeep Lamichhane remains the key in the bowling setup. Sompal Kami had a good day versus Zimbabwe. Abhinash Bohara has been on his mark as well. 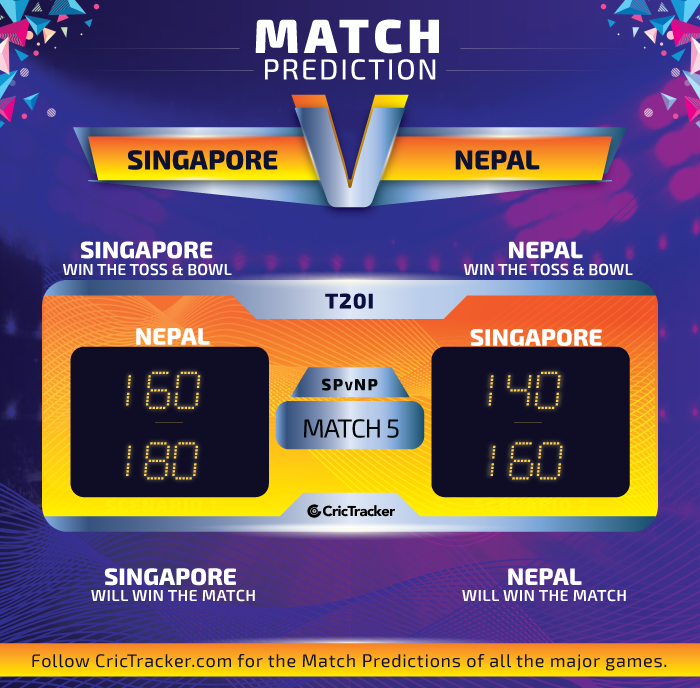