With two fifties and six wickets across three matches, Sean Williams will be a prime contender as captain in fantasy team.

The 6th match of the Singapore T20I Tri-Series 2019 will be played between Singapore and Zimbabwe at the Indian Association Ground in Singapore.

This game will be available on Fan code in India and can be viewed on the Wec Sports’ Facebook page and YouTube channel.

Singapore is having a mixed tournament at home as they started with a defeat against Nepal which was their first loss in the T20I format. However, in the following game, they took down Zimbabwe in a thriller by 4 runs. It was Singapore’s first-ever International match against a full-member nation and they made that 18 overs-a-side match a memorable one.

Zimbabwe defeated Nepal in the remaining two matches and are placed at top of the table ahead of the final match. Whoever among Singapore and Zimbabwe will win the game on Thursday, they will end up as the table-toppers of the tournament. The abandoned fixture between Singapore and Nepal on Wednesday has sealed Nepal’s possibility of finishing at No.2 or No.3.

The game to be played on Wednesday got abandoned due to rain and we might see similar weather for the final game of the tournament. However, the weather is expected to get cleared by 5 PM local time which is over two hours before the scheduled start.

Zimbabwe managed to defend the target of 161 against Nepal team in the previous match which doesn’t have a great batting depth. However, on Thursday, we might see a successful chase of 160+ given the good conditions to bat at the Indian Association Ground.

Amjad Mahboob missed the first game but bowled a crucial spell and took two wickets against Zimbabwe. Timothy David will be crucial as well as he registered his 8th consecutive score of 35+ for Singapore on Sunday. Surendran Chandramohan has been in good form and averages 40+ in all formats he has played thus far. Janak Prakash and Ryan Burl are expected to play a role with both bat and ball. Regis Chakabva and Peter Moor are expected to score the big runs for Zimbabwe.

With two fifties and six wickets across three matches, Sean Williams will be a prime contender as captain in fantasy team. 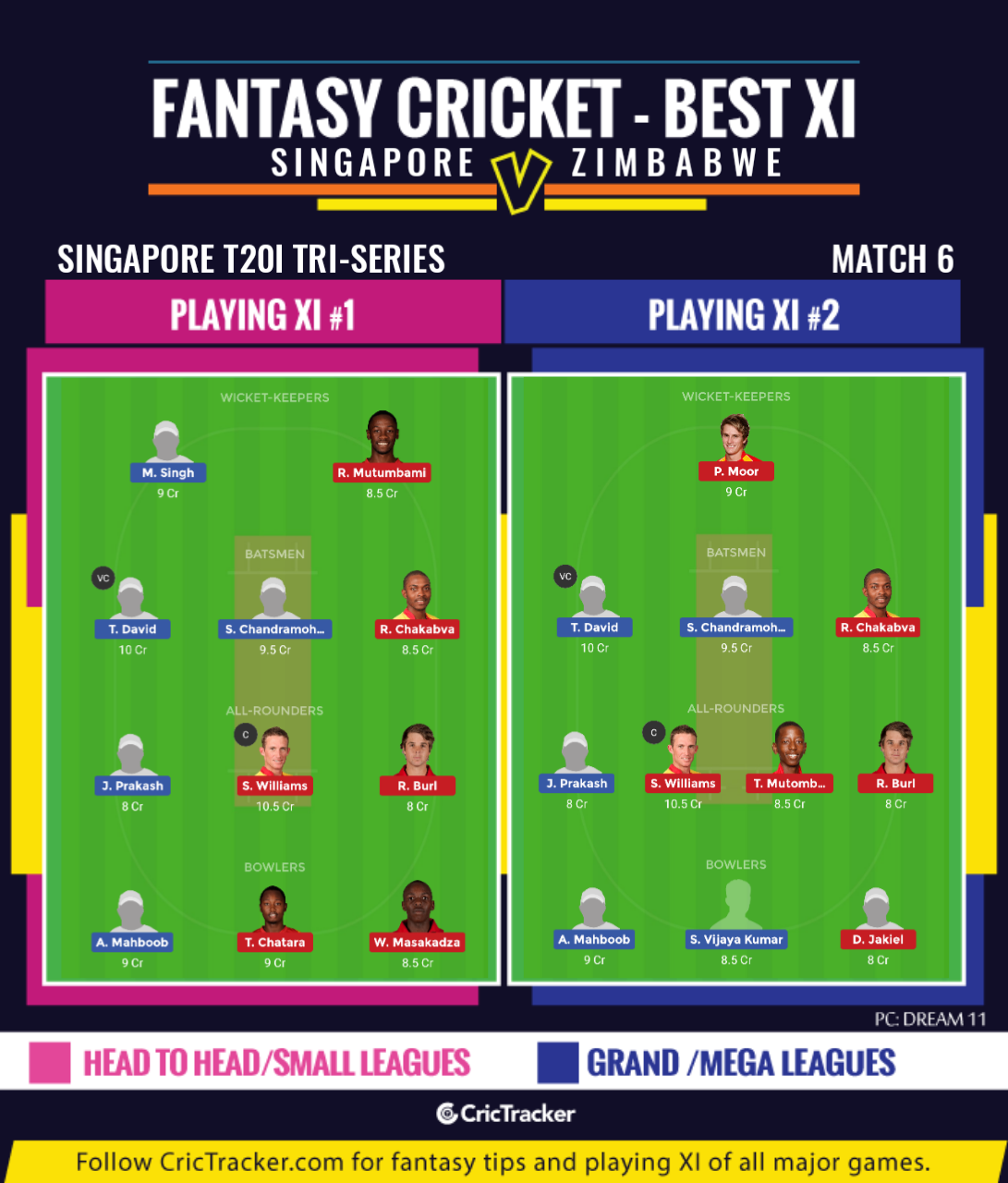 Zimbabwe has made quite a few changes in the tournament. They are unlikely to experiment on Thursday due to the importance of the match. Singapore is expected to make not more than one change from their XI which defeated Zimbabwe.

Zimbabwe might edge past Singapore in yet another thriller between them on Thursday.