Each team will play four games in the series.

Starting from 27th September 2019, Singapore will host Zimbabwe and Nepal for a tri-nation series. T20I matches will be played for a week till 3rd October 2019. While there is no final, the leader of the points table will be declared the winner of this tri-series. For the first time ever, Singapore will be participating in the T20 World Cup 2020 Qualifier tournament.

They will look to make the best use of this series for their preparations. The Qualifiers are set to be held later in October 2019 in the United Arab Emirates (UAE). 14 participants will fight each other in a total of 51 matches to decide who will make it through.

Also, there is a captaincy change for Zimbabwe since Hamilton Masakadza announced his retirement after the conclusion of the recent tri-series in Bangladesh. In his place, Sean Williams will be taking up the leadership responsibility for the team. Sikandar Raza, who was left out of the Zimbabwe squad for the Bangladesh series over pending disciplinary issues didn’t find a place in the side this time as well.

For Nepal, Paras Khadka will continue as the skipper. Dipendra Singh Airee will act as Khadka’s deputy. Sandeep Lamichhane is another big attraction in this series and the presence of these star players is likely to attract a lot of fans. The hosts, meanwhile, are yet to name their team for the tri-series. Each team will play four games in the series. All the matches will be hosted at the Indian Association Ground, Singapore. 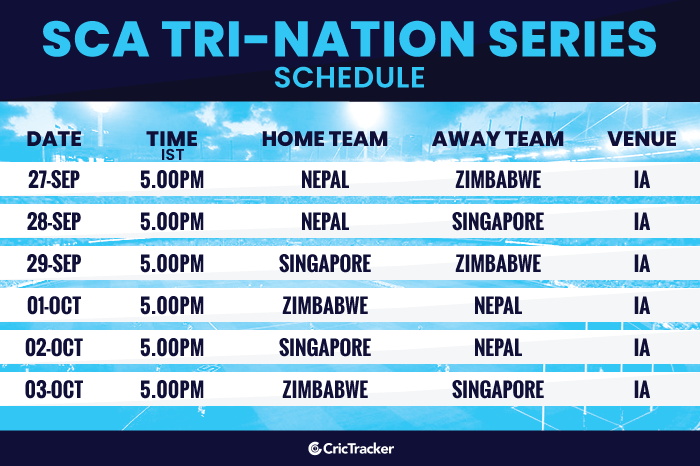 (All games will be played at the Indian Association Ground, Singapore at 5:00 PM Indian Standard Time)