The Hurricanes need a win desperately after being placed at the bottom half of the points table.

The Sydney Sixers slumped to a 46-run defeat at the hands of the Sydney Thunder the other day in Adelaide Oval. But despite the loss, Daniel Hughes and Co are sitting pretty in the top half of the points table. From 12 matches, the team has 32 points and have already made their way into the next round.

Their upcoming match is against the Hobart Hurricanes on Sunday, December 24. The game will be played at the iconic Melbourne Cricket Ground. The Hurricanes, on the other hand, are on a bit of strife, being placed just above cellar dwellers Melbourne Renegades.

With 23 points from 12 matches, Matthew Wade’s men need to find a victory somehow to climb the ladder. In their previous meeting, it was the Hurricanes, who came out trumps by 16 runs at the Bellerive Oval.

The pitch in Melbourne has been a decent one for batting in the tournament. The scores have been above the 170-run mark pretty much most times. The track also isn’t expected to change nature throughout the duration of the game.

The conditions will be cloudy with the temperature around 33 degrees Celsius. The humidity will mostly be in the 30s with no chances of rain whatsoever.

Playing Combinations for SIX vs HUR

Josh Phillipe has been a fulcrum for the Sixers in the ongoing edition of the Big Bash League. In 12 matches, the right-hander has scored 441 runs at an average and strike-rate of 36.75 and 150 respectively.

He prefers to take the attack to the opposition and hardly goes into his shell. He has been far more consistent than his teammates and he would want to carry on with his good form.

Matthew Wade has played a number of match-winning knocks for the Hurricanes. But the Hurricanes didn’t have much of his services since he was busy with the Australian team, playing in the four-match Test series against India.

Against the Scorchers, he managed a score of six. But bearing in mind the talent he possesses, he has every chance of taking the Sixers down. 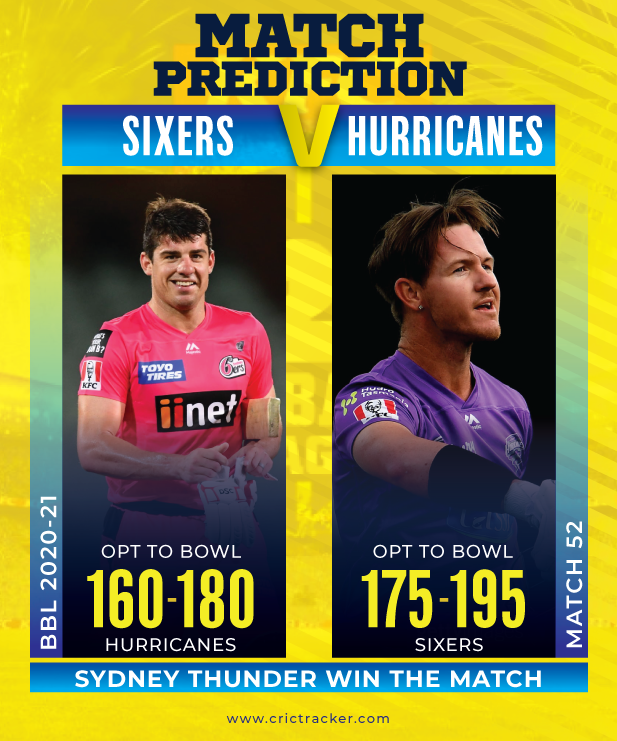