All the stats and numbers that were recorded during the fourth day’s play of the Cape Town Test match.

South Africa wrapped up the Cape Town Test with some fine bowling performances after the lower order’s efforts with the bat. Quinton de Kock and Vernon Philander’s fifties helped the hosts to post 373 on board. Australia started well in the 430-run chase as they made 57/0 in 20 overs. However, some poor shots and tight bowling saw the Aussies collapse to 107/10 losing their last ten wickets for just 50 runs.

All the stats and numbers that were recorded during the fourth day’s play of the Cape Town Test match:

As many as three wickets came in in bowled/lbw in this Cape Town Test which are the fewest in any Test match. The 1902 Australia-England Test in Melbourne and the 1969 India-NZ Mumbai Test had only five bowled/lbw dismissals.

He took his 8th 5-wicket haul in Test cricket with 5/23 in the 2nd innings following his 4/87 in the first innings. His match figures of 9/110 are his best in Test cricket and also the first time he took two 4-fers in a Test match.

18 – Number of caught dismissals for South Africa in this Test match. These are the most number of wickets they lost with fielder/keeper taking catches.

Fielders took 29 catches in this Test including one catch by a substitute; the most number of catches for fielders in a Test match. The 1904 Melbourne Test between Australia and England had 27 catches held by the fielders.

301 – Nathan Lyon became the 6th player to take 300 wickets in Test cricket for Australia. He is the 5th off-spinner and overall the 9th spinner to bag 300 Test wickets.

Most wickets in Test cricket for Australia: 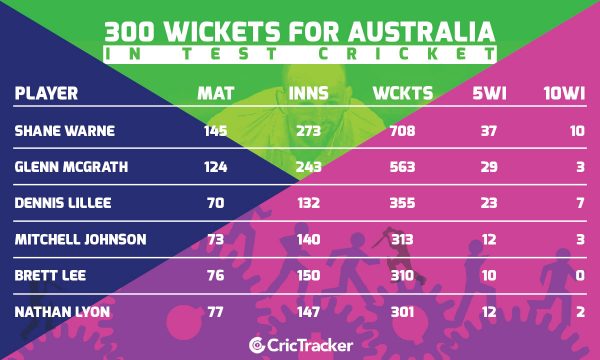 Most wickets for spinners in Test cricket: 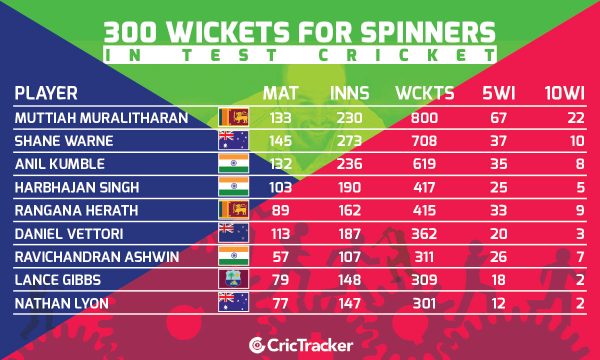