The Aussies will once again be dependent on their Top-4 in David Warner, Aaron Finch, Steven Smith, and Marnus Labuschagne.

The first game of the three-match One-day International series between South Africa and Australia will be played at the Boland Park in Paarl.

After a rather one-sided Twenty20 International series where the hosts suffered two of their worst defeats (by runs) in the shortest format of the game, South Africa will lock horns with Australia in the first of the three ODIs.

South Africa have had a wood over Australia in 50-over cricket in the past four years. Since the start of 2016, the Proteas have won nine of the 12 ODIs which included a 5-0 whitewash in 2016 and a victory in an otherwise disastrous 2019 World Cup campaign.

But, as they say, numbers do not always tell the entire story. And, despite such a great record, the Quinton de Kock-led South Africa will head into the series as underdogs. They will be without their experienced duo of Faf du Plessis and Rassie van der Dussen and the onus of leading the batting-unit will be firmly on the shoulders; much like the case with Kagiso Rabada when it comes to the fast bowling department.

Australia, on the other hand, have most bases covered in the form of a power-packed top-4, brilliant spin bowlers and of-course the ever-relentless pace attack. But, their soft underbelly- middle-order- will once again be the focus as they aim to notch up their first ODI series win against the Proteas since 2014-15.

Bright sunny spells are expected to be the order of the day in Paarl on Saturday if the weather reports are to be believed. According to the report, the temperature is set to fluctuate between 18-29 degrees Celsius while the humidity is set to hover around 33%. Chances of rain- 0℅

The past two games played at the Boland Park since January 2015 has seen a fair balance between bat and ball. While AB de Villiers sizzled with a breathtaking 176 against Bangladesh, the likes of Rabada and Phehlukwayo have also ruled the roost with three and four-wicket hauls.

Average first innings score: 239 (In 12 ODIs played at the venue)

Kagiso Rabada has been ruled out of the ODI series due to groin strain.

Temba Bavuma has been declared fit for the first ODI.

The Proteas will once again bank on the likes of Quinton de Kock [187 runs]  and Temba Bavuma [148 runs], who were brilliant in the ODI series against England. In the absence of du Plessis and van der Dussen, the onus of spearheading the middle-order will be on David Miller, who averages a whopping 96.25 in 7 games against the Aussies since 2016.

As far as bowling is concerned the onus will be on Lungi Ngidi and Tabraiz Shamsi to spearhead the pace and spin-bowling department.

The Aussies will once again be dependent on their top-4 in David Warner, Aaron Finch, Steven Smith, and Marnus Labuschagne- to build a platform to enable the likes of Alex Carey to provide the finishing touches.

Ashton Agar and Adam Zampa were all over the South Africans in the T20I series and they once again the key in the middle-overs. Mitchell Starc and Pat Cummins will lead the fast bowling department while it will be interesting to see if Josh Hazlewood gets a look-in in place of Kane Richardson. 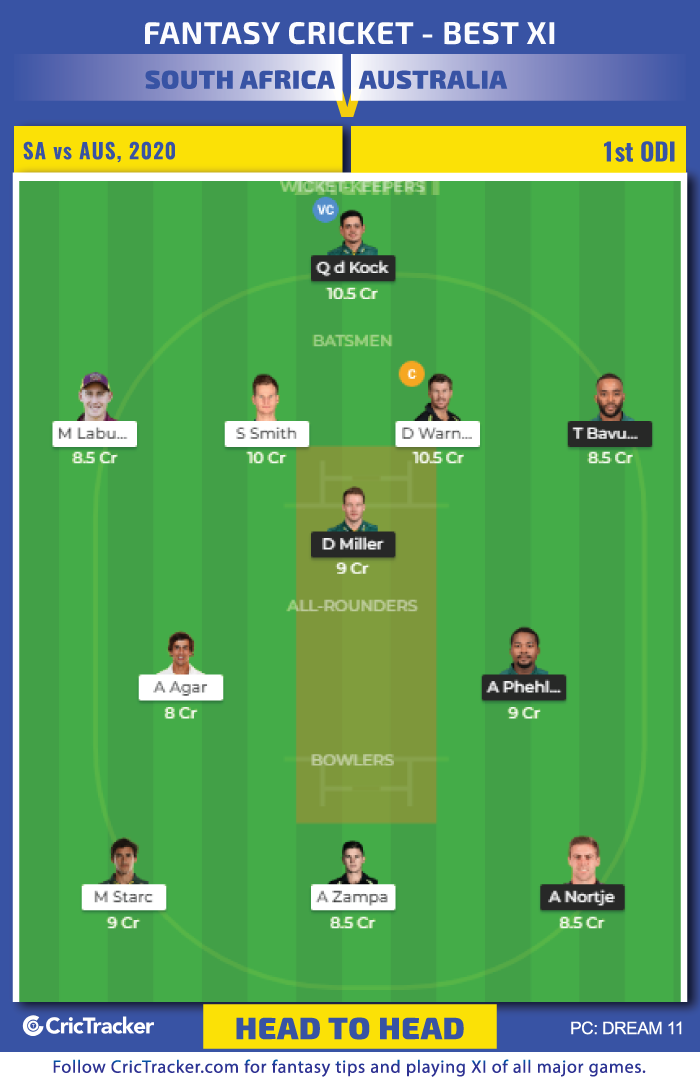 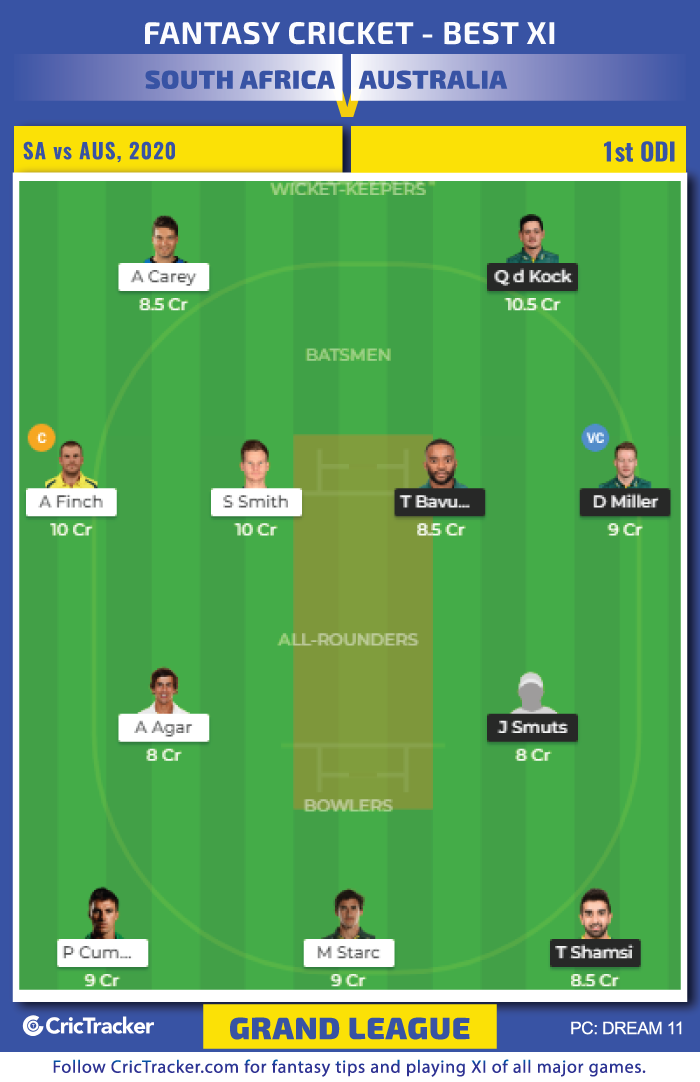 David Miller loves batting against the Aussies. Since 2016, ‘Killer Miller’ has scored 385 runs in seven innings at an average of 96.25 and a strike-rate of 122.24. Picking him in your grand-league side could be worth a punt.

Each of David Warner, Aaron Finch, Quinton de Kock, and Steven Smith have scored a hundred in their past series. Picking them as captain/vice-captain will go a long way, as far as reaping rewards are concerned.

Australia are expected to come out as winners.