David Warner and Aaron Finch who are among the top batsmen in T20 cricket currently are popular picks in Dream11.

The second match of the three-match T20 International series between South Africa and Australia will be played on 23 February at St George’s Park in Port Elizabeth.

After competing hard against England in their previous T20I assignment, South Africa were thrashed by Australia in the first match of this series in Johannesburg. Whilst the return of Faf du Plessis and Kagiso Rabada was expected to strengthen South Africa’s side, the visitors proved to be too hot for the hosts. The Proteas are a better side than what they displayed in the first match and will look to upgrade the level of their performance in the do-or-die game.

Rabada had a forgettable outing in Johannesburg, conceding 45 runs in three overs. In his last ten T20Is, the right-arm pacer had an economy of less than nine in just two games; and in five matches, his economy was higher than ten. South Africa would want their premium bowler to get his form back in international T20 cricket.

Australia are in a great from as far as the shortest format is concerned. The Aaron Finch-led side hasn’t lost their previous four series. The Aussies have a great bowling attack and a strong top-order. And, to fix their middle-order, they have given opportunities to Matthew Wade and Mitchell Marsh.

The temperature at the match venue during the game time will range between 18℃ to 21℃. No rain is expected during the course of the game and throughout the day as well.

The pitch used for international matches at St George’s Park in Port Elizabeth has been on the slower side in recent times. The deck hasn’t been the best for stroke-making. However, the last T20I, on this ground, was played in 2012. So, it would be interesting to see how the pitch plays in the second match.

South Africa’s new skipper Quinton de Kock is on the top of his game currently. The wicketkeeper-batsman has been scoring consistently of late and is the best option to bank on in the wicketkeeper section. Temba Bavuma is expected to be back for this game and join de Kock at the top of the order. The right-handed batsman has used his opportunities to the fullest in the white-ball cricket so far and can have a good outing again.

The former South African skipper Faf du Plessis is struggling with his form currently. However, he is a quality batsman. Among the top batsmen from both sides, his credit (nine) is the lowest. The experienced batsman will be raring to have a good game under his belt and may have a good time in the second match.

Kagiso Rabada, as mentioned above, has struggled in this format of late. But that doesn’t change the fact that he is an excellent bowler. The leader of the South African bowling attack is a wicket-taker and is an excellent punt because of his low selection percentage. Lungi Ngidi was among the wickets in the T20 series against England, albeit very expensive. Tabraiz Shamsi has bowled well of late in T20Is. In his last ten T20Is, he leaked runs at an economy of more than eight in just one game.

David Warner and Aaron Finch who are among the top batsmen in T20 cricket currently are popular picks in Dream11. The southpaw opening batsman failed to stamp his authority in the first match. However, leaving him out because of just one failure can backfire. Steve Smith, also, has been in good form in recent times; and is a reliable option to bank on.

Ashton Agar who bagged a five wicket-haul in the first match has been in good form in T20Is recently. Since 2019, his economy in every match has been less than eight. In this period, the left-arm orthodox spinner has gone wicketless in just one T20I. Mitchell Starc is Australia’s best T20 bowler and is an obvious pick in the fantasy team for small-leagues.

Pat Cummins has a knack of picking wickets with the new ball and can replicate the same again. Thus, Cummins is also a safe pick. Adam Zampa, Australia’s premium spinner in the white-ball cricket, delivers the goods more often than not. In his T20I career of 28 matches, the leg-spinner has conceded runs at an economy of more than eight in only one match. 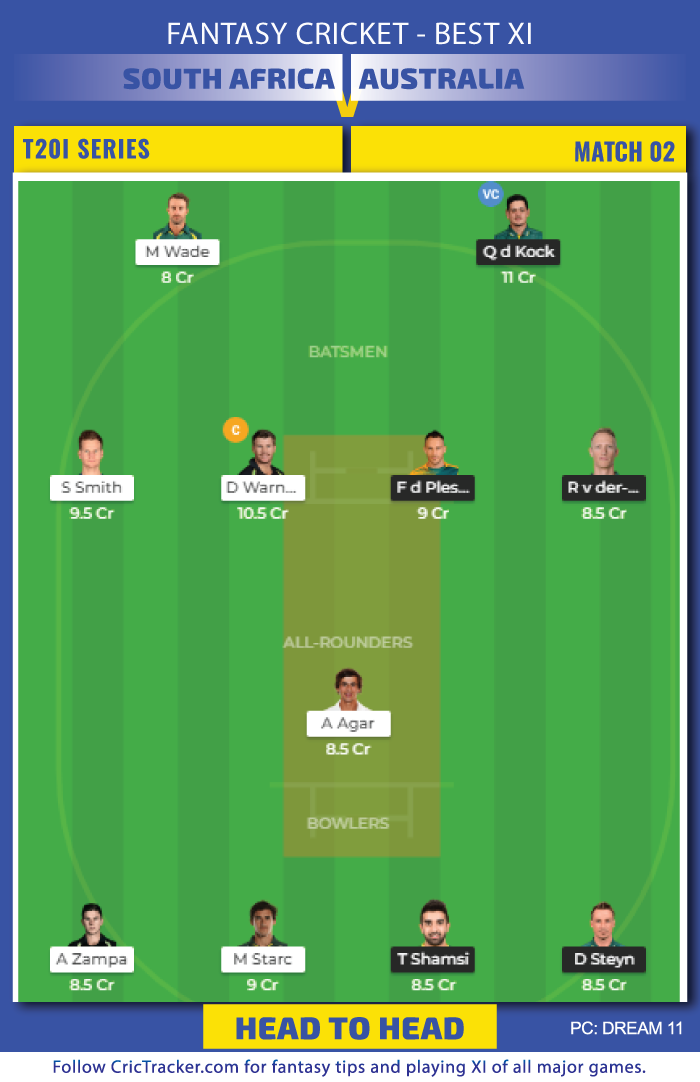 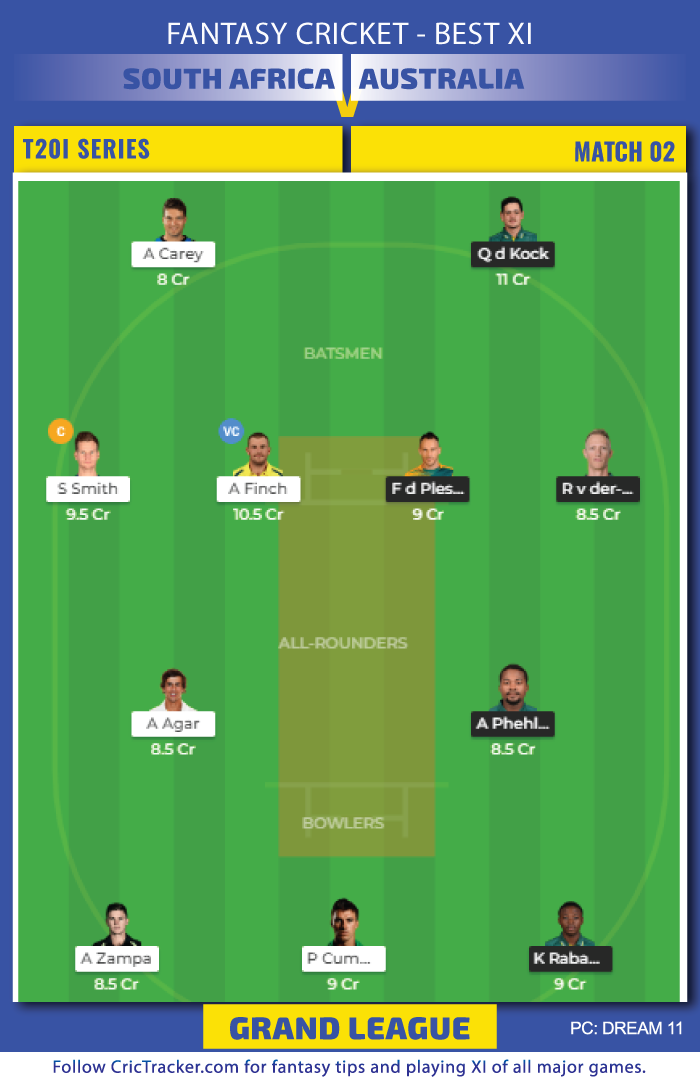 Australia won their previous two T20I series against South Africa in the latter’s home. We predict Australia to win this game and clinch this series.