You can avoid picking spinners in this match as the pacers are likely to rule the roost. Keep an eye on the playing XIs and accordingly, pick the pacers.

The fourth and final Test match of the series between South Africa and England will be played at The Wanderers Stadium in Johannesburg.

It seemed as if South Africa redeemed themselves after they won the opening Test of the series. But England have admirably fought back in the following two matches and are now leading the series by 2-1. They played some superb cricket in Cape Town and Port Elizabeth putting extreme pressure on the home side. They would love to win the series by winning the fourth and final game of the series.

South Africa, on the other hand, have a lot of problems to solve. It seems they won long back and there are questions over their skipper Faf du Plessis’ immediate future as well. As of now though they would like to concentrate on levelling the series and they certainly have the capability to do it. But their premier pacer Kagiso Rabada is also missing as well and it will be interesting to see how they will front up the England challenge at the pacy Wanderers.

Rain is in the forecast on each of the first four days during this Test match. The overcast conditions will greet both the teams with only the fifth day likely to be pleasant for a game of cricket. It will be interesting to see how many overs are bowled each day or rain will dominate the match.

The Wanderers is known to support the pacers big time and both the sides have some exceptional bowlers. The pitch is expected to offer swing to the seamers yet again and expect the team winning the toss to opt to bowl thanks to the overcast conditions.

Kagiso Rabada will miss this Test match owing to the ban imposed by the ICC for breaching the Code of Conduct.

Ben Stokes has been simply exceptional in this series. He is the highest run-getter of the series with 288 runs in five innings at an average of 57.60 and has also picked six wickets. Dom Sibley (236 runs at 59 avg) and Ollie Pope (199 runs in three innings)  are other batsmen who can be consistent with the bat. Stuart Broad (12 wickets) and Sam Curran (9 wickets) can be picked in your Dream11 Fantasy team.

Quinton de Kock, with 265 runs in six innings, has been the flag bearer for South Africa with the bat. Dean Elgar (194 runs) and Rassie van der Dussen (176 runs) are the closest to him. Anrich Nortje (11 wickets) has been the revelation with the ball while Vernon Philander (6 wickets and 146 runs), in the final Test of his career, will definitely make an impact. 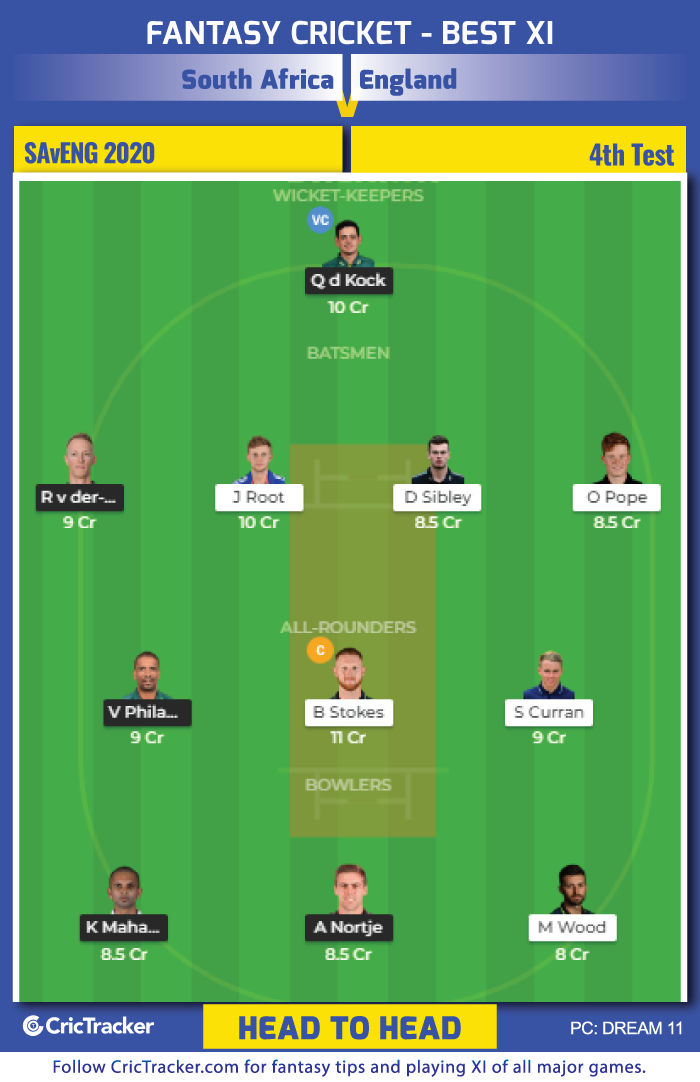 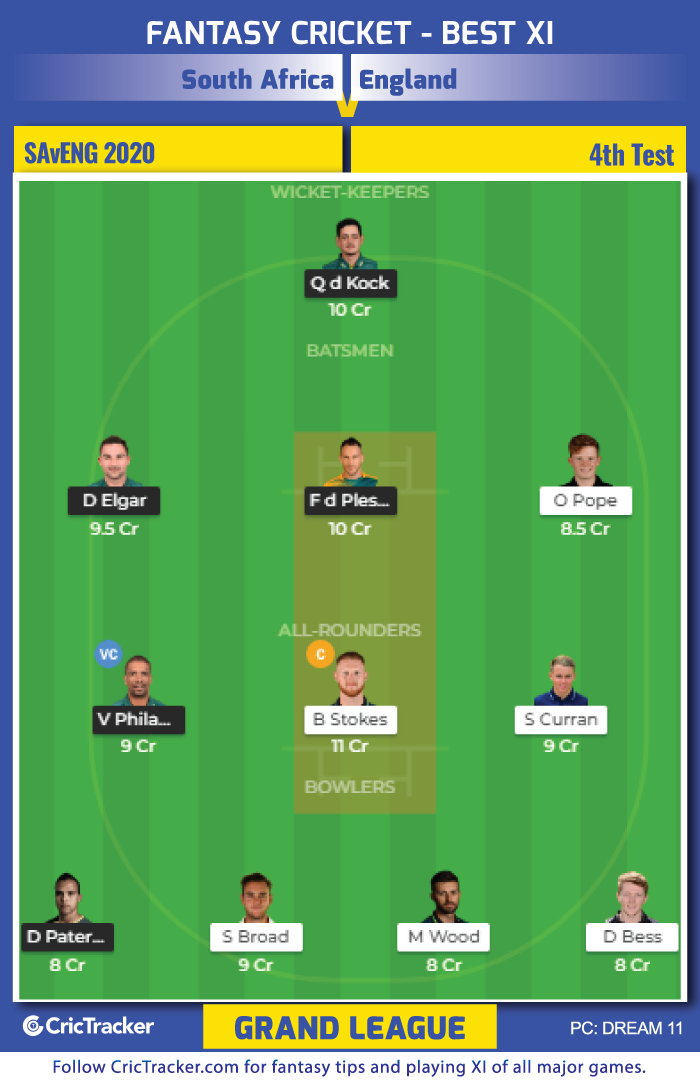 Faf du Plessis is under a lot of pressure and he is due a big knock now. He can be picked in your Dream11 Fantasy side and though it is too risky, he can be made the C or VC in Grand League contests.

You can avoid picking spinners in this match as the pacers are likely to rule the roost. Keep an eye on the playing XIs and accordingly, pick the pacers.