Proteas have rested some of their key players for the T20Is against the No.1 ranked team.

Pakistan is a 1st ranked team in the world when it comes to T20I cricket. They have been the most consistent team in the last year and a half. Recently, they whitewashed New Zealand and Australia in the UAE and it speaks volumes on the quality of cricket they have played. With the likes of Babar Azam (no. 1 ranked), Fakar Zaman and Shoaib Malik in the line-up Pakistan will be hoping for a much better performance in this format against the hosts. Meanwhile, South Africa will be looking to improve their record in this format as they are 5th in the team rankings.

Proteas have rested some of their key players for the T20I; this is a great opportunity for the youngster to show their skills at the highest level. Youngsters like Lutho Sipamla, Rassie van der Dussen will need to prove their mettle and make a contention for the World Cup squad.

Generally, Newlands is a good batting wicket with some assistance to the spinners. Teams like to chase in this kind of wickets, expecting a score around 165.

Your Cricket knowledge can win you big! Play the Rotobash Fantasy.

Choices for captain and vice-captain: 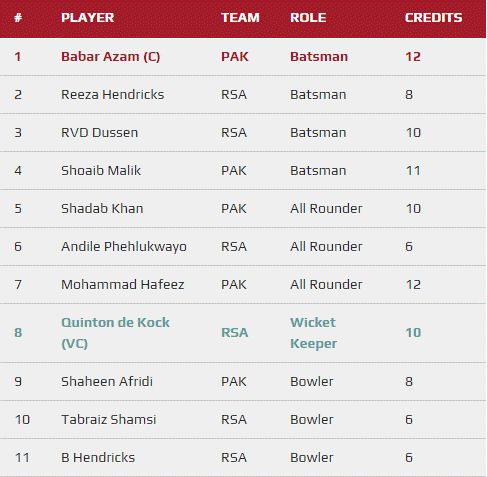 Shadab Khan is 2nd best bowler in the ICC T20I ranking, his variations are difficult to pick and with the pitch assisting the spinners; he can be your punt for your fantasy leagues.