The previous match was an excellent game of T20 cricket; the momentum shifted to and fro but in the end, South Africa won a close contest to take early lead. Pakistan won the toss and put hosts in to bat, after losing the first wicket of Gihahn Cloete, Reeza Hendricks and Faf du Plessis went all guns blazing as they put on a partnership of 131 runs and took their team to a daunting total of 193 runs.

In reply, Pakistan lost an early wicket in the form of Fakhar Zaman, after that Babar Azam and Hussain Talat stitched up a decent partnership of 81. When things were looking settled for Pakistan, David Miller came to action by an excellent run out in the form of Babar Azam. Miller was electric on the field as he took 4 catches and effected two run outs to be declared the Man of the Match.

Pakistan bowling looked a bit pale as none of the bowlers were able to provide the breakthrough in their middle overs. Mohammad Amir could earn a recall after a below-par bowling performance. While South Africa will be missing the services of du Plessis as he has been rested for the remainder of the series. In his absence, Miller will captain this inexperienced proteas side.

Choices for Captain and Vice–Captain: 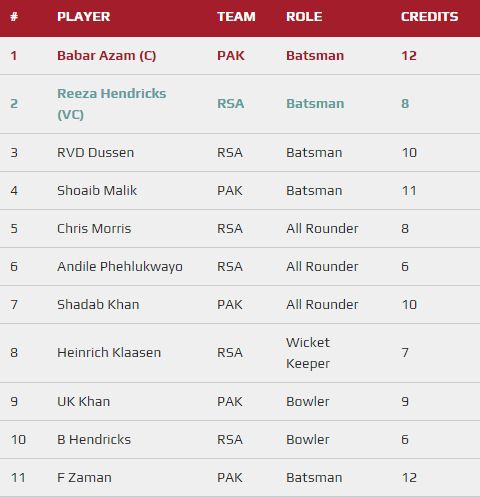 Janeman Malan was exceptional in the Mzansi Super League as he was the 6th highest run-scorer with 305 runs in 9 matches. He can be your punt in fantasy cricket for this match.