Will Sri Lanka make a comeback after the whitewash in the ODIs?

After contrasting shows in Test and ODI series, South Africa and Sri Lanka will conclude the tour with the three-match T20I series. Irrespective the format, every limited-overs game will now be looked at as the World Cup preparation. Keeping it in the mind, the hosts have gone against naming an experimental squad for this series which they normally do for the T20Is. Also, the Proteas are flying high after another clinical whitewash over the visitors.

Sri Lanka’s woes don’t seem to end in the ODIs. Their 2-0 win in the Test series seems to be long ago now and the recent performances only suggest that it is not going to be easy for them in the T20Is either. Having said that, the shorter the format, such under-fire teams become dangerous. They have nothing to lose and the pressure will be on South Africa as they are expected to win.

Newlands in Capetown will host the series opener and the pitch for the game is expected to be a belter. Average first innings score at the venue in 19 T20Is has been 150 and 13 matches out of those have been won by the teams bowling first. It will be mostly cloudy on Tuesday evening at the Newlands but there are no chances of rain during the game. A full house is expected for the encounter and the crowd is set to be entertained.

Quinton de Kock and Reeza Hendricks will open the innings as the latter is known for his exploits in the shortest format. This might well be the last chance for him to stake his claim for the World Cup. Faf du Plessis is set to play his last game before flying to India for the IPL while Rassie van der Dussen will bat next. JP Duminy and David Miller, at 5 and 6, are expected to bat according to the situation.

Kagiso Rabada is also playing his last game of the home season with Andile Phehlukwayo being the all-rounder. Anrich Nortje continues to get more chances with Lungi Ngidi and Imran Tahir being the other bowlers.

Sri Lanka should somehow find their best playing XI to register a win under their belt. The out-of-form Niroshan Dickwella and Sadeera Samarawickrama will open the innings while Kusal Mendis and Angelo Perera will look after the middle-order. The openers’ failures have always kept the middle-order under the lid. Thisara Perera becomes even more dangerous in this format with Lasith Malinga, Suranga Lakmal and Isuru Udana being the other bowlers.

The prediction is for South Africa to take an early lead in the three-match series. 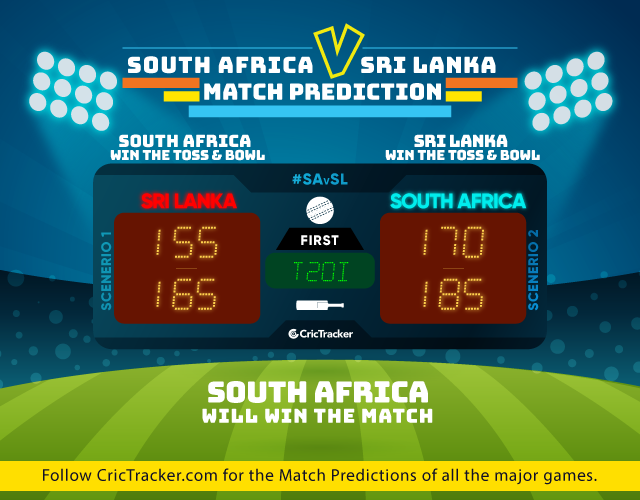