The Proteas will be looking forward to ending this season with one last win.

South Africa might have been clean swept in the Test series against Sri Lanka. But boy, haven’t they bounced back hard? The Proteas defeated Sri Lanka in the ODI series 5-0. In the shortest format of the game, they already lead 2-0 with the final game to be played on Sunday. Yet another clean sweep is on the cards for the Islanders.

Even though they might not be playing their strongest of squads, the South African team has been highly professional with the way they’ve gone about their business. The players have stepped up whenever required and helped in thumping the opposition. Before the players head off to a mini-break ahead of the World Cup 2019, the team will be looking forward to ending this season with one last win.

It could be another high-scoring affair at the bouncy Wanderers Stadium in Johannesburg. The ball will come onto the bat nicely and the players will enjoy playing at the venue. The Bull Ring could be absolutely intimidating for the visitors as the crowd really gets behind the home team. There is a prediction of an isolated thunderstorm during the evening but that might not affect the game much.

South Africa is likely to continue with the same eleven. Reeza Hendricks will open the innings with Aiden Markram. Rassie van der Dussen enjoys batting at three and will continue at the position. South Africa is yet to test Sinethemba Qeshile with the bat and he could bat higher up the order it the situation is ideal. Chris Morris and Dwaine Pretorius will be the all-rounders while Dale Steyn, Lutho Sipamla and Tabraiz Shamsi will be the three main bowlers.

The Sri Lankan team bats really deep but still they have failed to make a mark in this department. There could be a few changes for the last game of the series. Sadeera Samarawickrama is likely to open the batting while Priyamal Perera could play in the middle-order. Sri Lanka will also explore the option of playing an additional bowler.

South Africa is predicted to win the match and clean sweep Sri Lanka in the series. 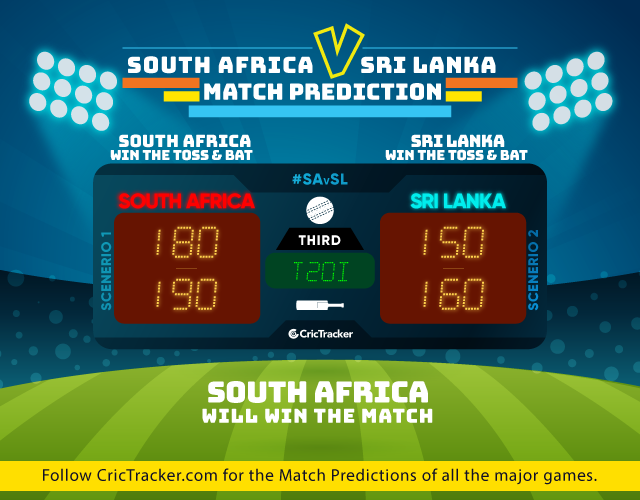