Nida Dar has earned 93 points in Dream11 across the three games in the T20I series.

Pakistan Women have been impressive with their all-round performances in the ongoing limited-overs tour of South Africa. After drawing the 3-match ODI series, the Bismah Maroof-led team have taken a 2-1 lead in the 5-match T20I series. The series has caught up with the trend of chasing team’s domination as the teams batting second won all the three matches in this series while chasing a target of 120 and more.

The Suné Luus-led team couldn’t capitalize the momentum in the previous game and let Pakistan take lead. A collective top-order performance helped the hosts finish on 138/3 in the 20 overs. The Pakistan side was three down for just three runs on the board by 3rd over. However, they bounced back with the help of middle-order contributions to register their highest successful T20I run-chase.

The 4th game of the 5-match T20I series between South Africa Women and Pakistan Women will be hosted by the Willowmoore Park in Benoni.

There live streaming of this game is available on Cricket South Africa’s YouTube Channel.

The Willowmoore Park in Benoni has witnessed low scoring Women’s Twenty20 matches. However, the game on Tuesday will be the first ever Women’s T20I at this venue. Scores around 130 can be recorded considering the trend of this series and T20 league games in Men’s cricket.

South Africa might bring back Kapp in place of Shangase. Sinalo Jafta could also make way for Kapp if one of Lizelle Lee and Tazmin Brits take up keeping.

Points of selected players in each game of this series (Power Picks):

Bismah Maroof’s form makes her an ideal choice for one of the captain or vice-captain. Marizanne Kapp is a must as captain if she is part of the playing XI. Lizelle Lee and Nida Dar are ideal alternatives for these roles. 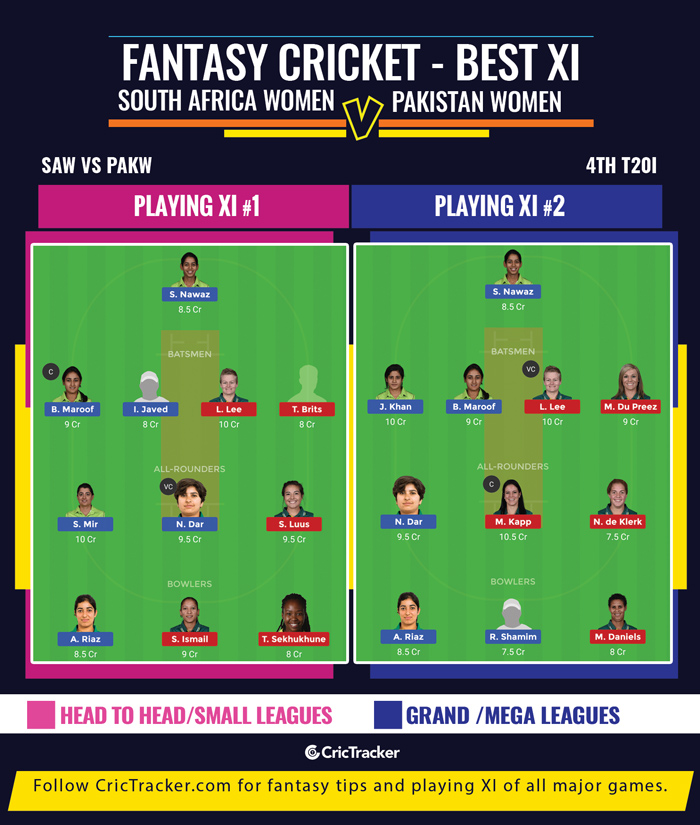 All-rounders category has six players who are worthy enough to be considered. Nidar Dar, Marizanne Kapp and Sana Mir are ideal among those but Kapp’s availability is uncertain. Nadine de Klerk is a good choice in her absence.