South Africa Women and Sri Lanka Women fought out in a thriller during the first ODI where the hosts edged out by a mere 7-run margin. Andrie Steyn’s 75 at the top was well backed by the skipper Dane van Niekerk who scored her maiden ODI century. Niekerk scored 102 off 117 balls with five fours and a six as South Africa finished with 225/7 from the restricted 48 overs. The visiting team got off to a flyer by scoring over 50 runs without losing a wicket in the first ten overs.

Despite any big contributions, the Lankans kept themselves in the chase as all the top five batters scored 15 and more. Nilakshi de Silva fought till the end with an unbeaten 39 but the visitors fell seven runs short of the target. The South African captain Niekerk chipped with two wickets and conceded only 26 runs from her ten overs. She also claimed a catch to become the first Women and only the 4th player in ODI history (Men/Women) to score a century, pick two wickets and take a catch as captain.

The 2nd game of the 3-match ODI series between South Africa Women and Sri Lanka Women will be hosted by the Senwes Park in Potchefstroom.

There will be no broadcast or live stream of this game in any part of the World.

The Senwes Park produced a perfect track for the ODI format. This venue is generally a high scoring one during the Women’s ODI matches. Scores over 220 are expected in the remainder of the series.

Sune Luus and Nadine de Klerk replaced Chole Tryon and Lizelle Lee in the squad respectively. Tryon suffered an injury while Lizelle failed to match the fitness standards of the team. Zintle Mali featured in the first ODI despite her name wasn’t announced in the squad.

Inoka Ranaweera has been easily the most consistent bowler for Sri Lanka Women on this tour having picked at least one wicket in all games. She bagged four wickets in the T20I series and 4-wicket haul during the warm-up game. Ranaweera finished with figures of 1/31 in the 10 overs during the first ODI. 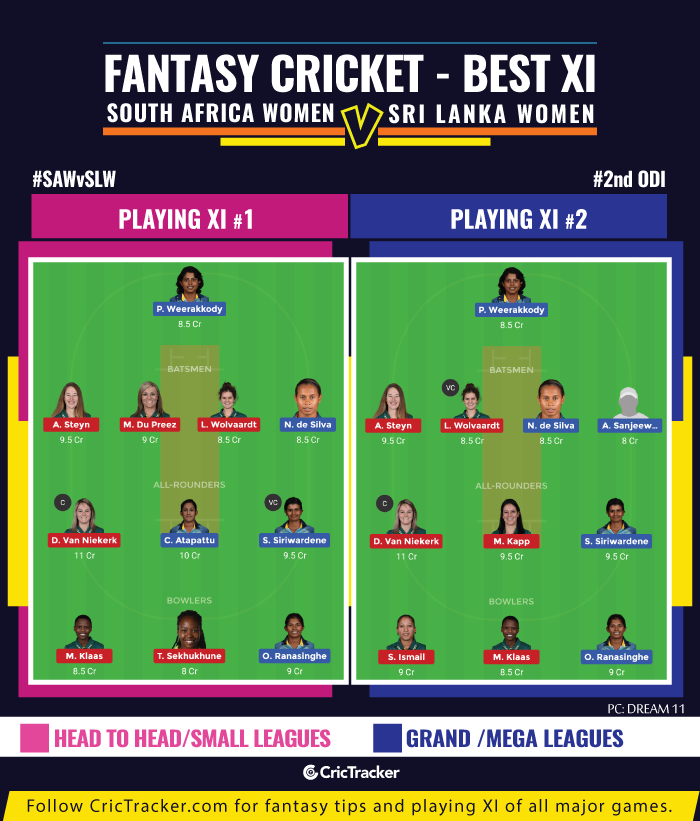 Sri Lanka Women went by batting order they used during the warm-up game in the first ODI and are expected to continue with the same in the second. In fact, South Africa Women could go with an unchanged XI except for Sune Luus or Nadine de Klerk for Zintle Mali.

South Africa Women are expected to seal the ODI series against the Sri Lanka Women with a comfortable win.