South Africa captain Dane van Niekerk is the best option for the captain or at least vice-captain's spot.

South Africa Women showed their dominance over the visiting Sri Lanka Women in the first T20I skimming through to a comfortable 7-wicket win. Skipper Dane van Niekerk played a key role with her all-round effort in the victory as she picked up 3/12 in her four overs to restrict the Lankans to 90/8. Opening the innings, Niekerk scored an unbeaten 71 in the run-chase. Thus, she became the first Woman to score 70+ runs and pick three or more wickets in the same T20I.

Sri Lanka could utilize the fact that the opposition has been hit by injuries and is struggling with the fitness of its players. Wicketkeeper Lizelle Lee has been withdrawn from South Africa’s T20I squad as she failed to meet fitness standards of the team. Another wicketkeeper Andrie Steyn replaces her while pacer Zintle Mali has also been ruled out of the series but no replacement has been announced. Prior to the series, vice-captain Chloe Tryon was replaced by Sune Luus.

The second game of the 3-match T20I series between South Africa Women and Sri Lanka Women will be hosted by the Wanderers in Johannesburg.

Johannesburg wicket is not different for the Women’s matches as it stays flat like in the Men’s limited-overs matches. The pitch here could produce 150+ total if South Africa bat first.

Andrie Steyn has replaced Lizelle Lee. Zintle Mali also has been ruled out of the remainder of the series.

Shabnim Ismail went wicketless in the first T20I but her recent T20I record signals danger in the opposition camp. She bagged 20 wickets from 13 T20I innings in 2018 that included a 5-wicket haul in Johannesburg.

South Africa captain Dane van Niekerk is the best option as captain or at least vice-captain. 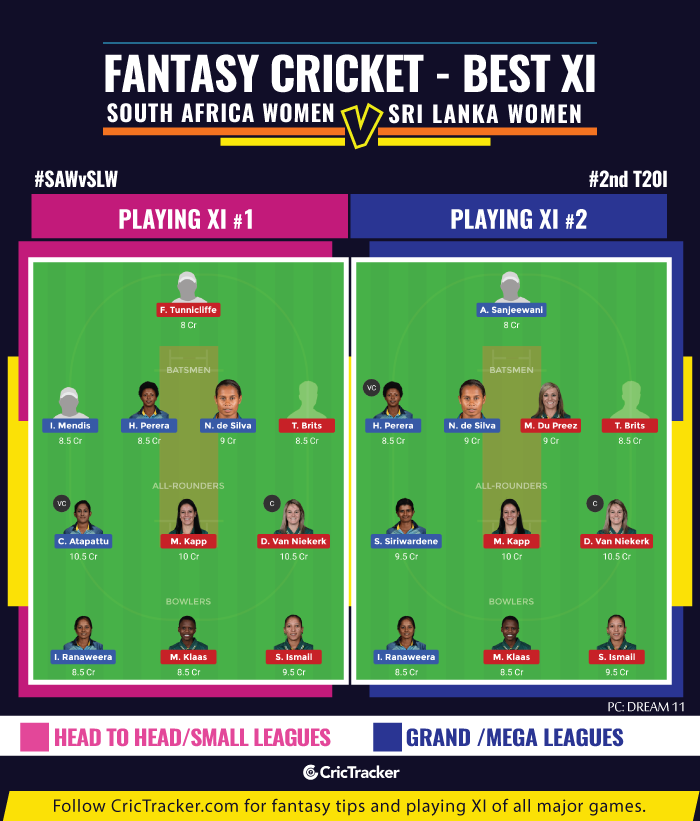 The playing XIs of both the teams during the first T20I comprise the best available players from the squad. Both the teams could go unchanged irrespective of how the players fared and the result.

South Africa Women are expected to seal the T20I series with yet another easy win against the Sri Lanka Women.