Afif Hossain will be a safe choice as vice-captain considering his all-round abilities.

The 2nd game of the 3-match Unofficial ODI series between Sri Lanka A and Bangladesh A will be played at the R Premadasa Stadium in Colombo.

Bangladesh A had a tough beginning to the unofficial ODI series against Sri Lanka A as they lost the first match by seven wickets. The way they lost the match was a concern for the visiting side. Bangladesh A elected to bat first at the Colombo’s RPS despite there was moisture on the track. Despite struggling in the first half, they reached 102/4 and set towards a respectable total.

However, the Sri Lanka A skipper Ashan Priyanjan took a 4-wicket haul to bundle out the Bangladesh team quickly. Priyanjan had figures of 4/10 in his 4.3 overs as Bangladesh A lost their last six wickets for 14 runs. The target of 117 was chased down in only 25.5 overs by the home side for the loss of three wickets. Priyanjan starred with the bat as well by scoring an unbeaten fifty.

A miracle is required to get a full 50-over game on Thursday at the Colombo’s R Premadasa Stadium. The venue could get the match resumed quickly after spells of rain. However, the weather forecast indicates there will be more than showers and drizzling.

The RPS Colombo has produced decent tracks for One-Day games. However, the recent most ones have been low-scoring ones. The weather conditions can be considered as a reason for it. The moisture due to continuous rains is one of the reasons.

Saif Hassan and Pathum Nissanka are reliable top-order batsmen in the respective teams. The duo has produced good scores while playing for Emerging, ‘A’ and Under-23 teams. Mohammad Naim also has a good record in List A cricket. He has scored four hundreds and nine fifties at an average of 48.21 in 33 matches.

Afif Hossain will be a safe choice as vice-captain considering his all-round abilities. 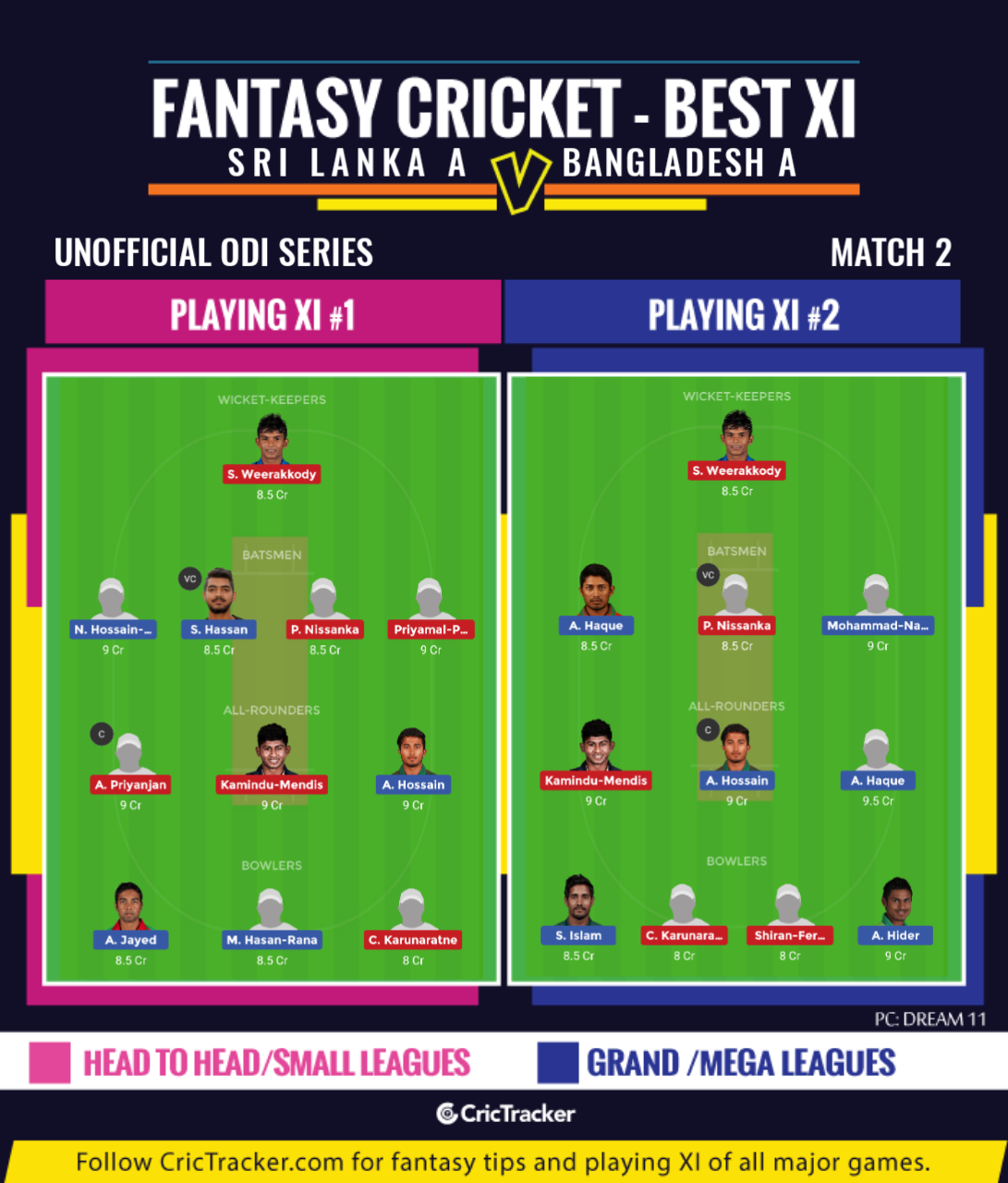 There is uncertainty over Bangladesh A line-up with five players joining the initially announced squad for this tour. Hence, we have picked the teams based on the XI which played the first ODI.

Bangladesh A side are expected to bounce back and level the series.