Being held for a noble cause of raising awareness, the tournament is also a rare opportunity for the fanatics to witness the legends of yesteryears back into action.

The 6th match in the resumed edition of the Road Safety World Series T20 will pit up Sri Lanka Legends against West Indies Legends at the newly-built Shaheed Veer Narayan Singh International Stadium in Raipur. After the inaugural edition of the tournament, which aims to create awareness for road safety in India was halted due to the pandemic, the organizers have opted to resume the proceedings from where they were paused in 2020.

Being held for a noble cause of raising awareness, the tournament is also a rare opportunity for the fanatics to witness the legends of yesteryears back into action.

The revamped Shaheed Veer Narayan Singh International Stadium has a seating capacity of 65,000. Though the venue is yet to host an international fixture, the average score in the 6 IPL games thus far has been 146, with four going in the favor of the chasing side. With summer approaching the subcontinent, the chances of rain are negligible.

Playing combinations for SLL vs WIL

The explosive top-order batsman Tilakrantne Dilshan’s hitting prowess has not been hidden from anyone. In 221 T20s, Dilshan has amassed 5193 runs with 34 half-centuries and one century to his name. Apart from his skills with the bat, Dilshan’s handy bowling makes him an impressive package in the format. He has claimed 64 wickets at an economy of 7.25 in his T20 bowling career.

With 7870 runs at a career strike rate of nearly 128 in 337 T20s, the aggressive and powerful batsman from the Caribbean, Dwayne Smith, is one of the established names in the shortest format of the game. Having played a plethora of T20 leagues over his professional career, one would expect him to utilize his experience come to this league between the stalwarts of the game.

The prediction is for Sri Lanka Legends to win the match. 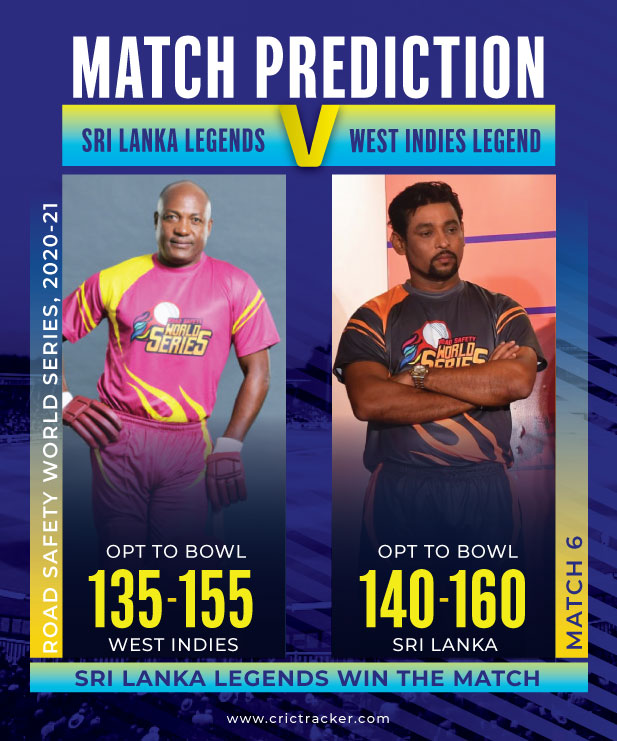