Sri Lanka vs England: 3rd ODI, Match Prediction - Who will win the match?

Sri Lanka vs England: 3rd ODI, Match Prediction – Who will win the match?

The weather forecast will not please the fans as thunderstorms are expected to greet Pallekele during the afternoon time.

England have been craving to reign supreme in Asia for a while now and have been failing to do so on many occasions. They had pretty mediocre outings in India and Bangladesh and were not able to churn the expected results pretty much every time. After taking a 1-0 lead in Dambulla, they have a chance to go unassailable in the series in Pallekele.

Lasith Malinga rolled back the years with a sensational performance in the second ODI. His exploits did help the Lankans stay alive in the game, but rain prevented a dramatic finish and the English were adjourned victorious by 31 runs. Chandimal and troops will be desperate to not repeat the mistakes and get back on level terms in the series.

The rain threat is certainly looming and there’s a good chance that this game might get washed out. The home crowd has been craving to watch some good cricket for a long time now and although these are not the greatest signs, they will remain optimistic to see some action.

The weather forecast will not please the fans as thunderstorms are expected to greet Pallekele during the afternoon time. The pitch looks fairly good and just the way a high-scoring encounter happened between South Africa and Sri Lanka here, another run-fest is expected. The drainage system at the venue is pretty decent, which should serve as a positive sign for the fans.

Upul Tharanga and Sadeera Samarawickrama (who replaced injured Kusal Perera) have to fire to give their side any hope in the game.  Dinesh Chandimal, Dhananjaya de Silva and Niroshan Dickwella will have to do the bulk of the scoring in the middle order with Thisara Perera and Dasun Shanaka doing the finishing duties. The onus of the bowling attack is going to fall on Lasith Malinga, who will be assisted by Nuwan Pradeep and two talented spinners in Akila Dananjaya and Lakshan Sandakan.

Every name in this lineup is destructive in some or the other way. Jason Roy and Jonny Bairstow will open the innings, with Joe Root, Eoin Morgan, Joe Denly, Ben Stokes and Jos Buttler comprising the middle order. Moeen Ali will have a bigger role to play with the ball alongside Adil Rashid if there’s some purchase for the spinners. Olly Stone and Chris Woakes are the seam bowling options for Morgan.

The prediction is for England to win comfortably and take an unassailable 2-0 lead. 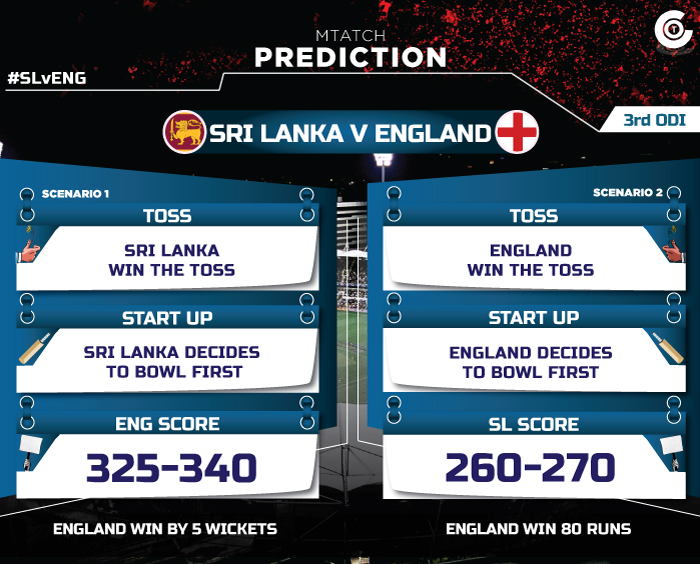 Get the latest Cricket News and updates from Sri Lanka vs England series, Match Predictions, Fantasy Cricket Tips and lots more on CricTracker.com.