Will the hosts be able to end the series on a high?

Sri Lanka stormed back in the series a little too late. But the way they fought and defended 191 in the fourth One-Day International was really commendable. South Africa ‘choked’ once again in the chase though it didn’t hurt them a great deal as far as the series concerned. The fifth and final game will be played in Colombo on Sunday and the home side will be up for the challenge to make it 3-2 by winning the last encounter.

The visitors have been superb in the limited-overs leg of the tour and looked set to make it 4-0 the other day. But the backing of the crowd and some superb death bowling from Sri Lanka denied them the victory by mere 3 runs. Nevertheless, they would be keen to end the series on a high and prove that it was only a one-off for the hosts. Also, Quinton de Kock would be looking to get off the mark and win a game for his country under his captaincy.

Ever since Angelo Mathews has demanded flat decks, high scores are being raked at ease and expect the same at R Premadasa Stadium as well. The team winning the toss will opt to bat first though as it has been tough chasing at the venue historically. There might be a little bit of turn for the spinners later in the evening and dew will also play its part. However, both the teams would be happy to put up a big total on the board and back themselves to defend it.

Sri Lanka would be buoyed by the victory and might be tempted to field the same XI. But they still have to address a few issues and one of them is the fast bowler who can make early inroads. Lahiru Kumara hasn’t been doing the job and was expensive as well. Kasun Rajitha is likely to come into the setup who impressed in Windies Tests. The rest of the line-up will be the same and is expected to deliver the goods, especially the top order.

The visitors, on the other hand, would be keen to continue with the same XI and test their fringe players again. They fared decently in the previous game and deserve another opportunity. With result not mattering much, they won’t be worried about the perfect combination as of now. Keshav Maharaj and Junior Dala were ordinary in Pallekele and should be looking to make a mark in this game.

The prediction is for South Africa to win the high-scoring encounter and make it 4-1 in the series. 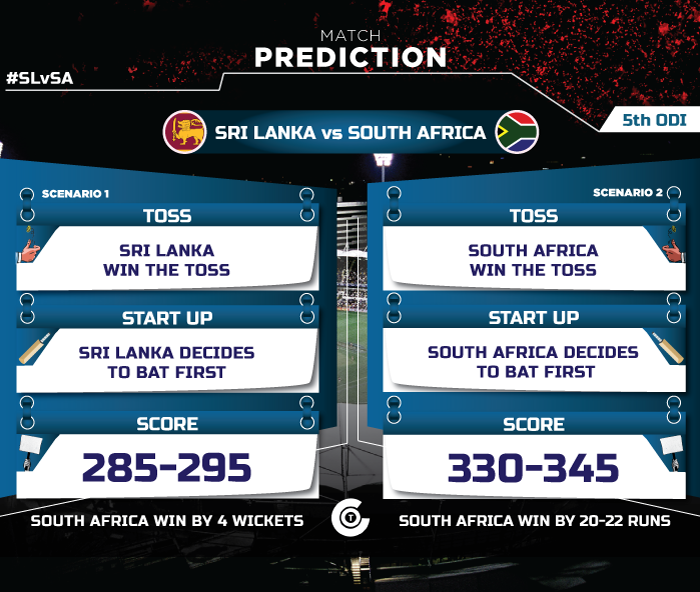