West Indies last won an ODI in Sri Lanka way back in August 2005.

The West Indies beat the Afghanistan 3-0 and ended 2019 on a grand note. Their next assignment is the three-match ODI series against Sri Lanka, starting Saturday, February 22. The opening match is scheduled to take place at the Sinhalese Sports Club (SSC) in Colombo. The Caribbean team has started the tour on a grand note after convincingly winning their warmup match in Katunayake by six wickets.

The Lankans, on the other hand, would be returning to One Day Cricket after the series in Pakistan last year. Going into the upcoming game, statistics well and truly speak in favour of the home team. West Indies last won an ODI in Sri Lanka way back in August 2005. At the SSC, the visitors have won only once in 1993. On head to head, the Lanka have won nine out of 12 matches in home conditions.

The average score at the SSC in ODIs is 235, which suggests that batting may not be that easy. The venue will be hosting an ODI after almost three years. Also 30 out of the 53 games have been won by the team, batting second. The conditions will be on the cloudy side with chances of rain. From 1 PM to 3 PM, the chance percentage goes up to 51. The temperature will be around 31 degrees Celsius.

Dimuth Karunaratne and Kusal Perera are again set to open the batting after Lanka’s home campaign against Bangladesh in July 2019. Both of them didn’t play the Pakistan ODIs. Thisara and Niroshan Dickwella have also made their comebacks. A lot will depend of Kusal Mendis in the middle order.

The team also the has the experience of Angelo Mathews, who provides solidity to the batting. Perera may not make it into the eleven right away with Shanaka being preferred ahead of him. There’s also a chance for Lanka to play both their specialist spinners- Hasaranga and Sandakan.

In the absence of Evin Lewis and Shimron Hetmyer, the visitors’ batting will be in for a stern test. Shai Hope holds the key at the top without a shred of a doubt. Roston Chase is coming of a century in the warmups and is in good rhythm. Darren Bravo will be looking to make a point after his return.

The middle-order has the power-hitters in Nicholas Pooran and Kieron Pollard. Jason Holder would also need to bring forth all his experience. Sheldon Cottrell and Alzarri Joseph are likely to shoulder the pace bowling department. Leg-spinner Hayden Walsh Jr would also be one to watch out for. 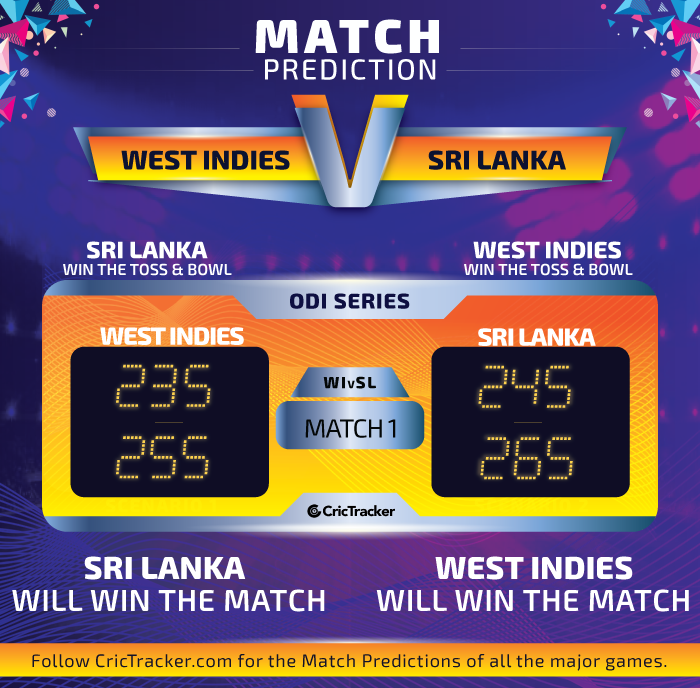