The Lankans have beaten the Caribbean team in both T20Is in Pallekele.

West Indies gave Sri Lanka a run for their money in two of the three ODIs, but both times they fell short. As a result, Kieron Pollard and Co lost the series 0-3. The Caribbean team is now set to unleash their skills in a couple of T20Is against the Lankans. The two-match series gets underway on Wednesday, March 4 with both games set to take place at Pallekele International Cricket Stadium.

Since 2009, the teams have faced each other in nine T20Is with Lanka winning six times. But the sides have a 2-2 record in Sri Lanka. In Pallekele though, the hosts have beaten the West Indies both times in 2012 and 2015. The Caribbeans haven’t had the best of times as after the 2019 World Cup as they have lost eight out of 11 completed T20Is. The Lankans are also coming off a 0-2 defeat to India.

The pitch in Pallekele has been a belter thus far. Out of 17 T20Is that produced outright results, 11 were won by the team, batting first. Chasing could be a tad tricky. The average score at the venue is 165, suggesting a high-scoring affair. In 2016, Australia scored 263/3 at the same ground. The conditions will be cloudy with no chance of rain. The temperature will be around 25 degrees Celsius.

The Lankan batting showed ominous form in the ODIs and they will be keen to replicate the same in the shorter formats as well. Kusal Perera and Kusal Mendis have complemented each other well and are likely to open. Avishka is in red-hot form as well. Dickwella adds firepower to the middle order.

Angelo Mathews should be in the eleven after his work in the final ODI where he picked four wickets. Dasun Shanaka didn’t play the ODIs, but is expected to make the eleven. Leg-spinner Wanindu Hasaranga posed some threat to the opposition and his role will be of prime importance.

Shai Hope was in stupendous touch in the ODIs and it won’t be a surprise if he makes the eleven, also being the more experienced player to Brandon King. Lendl Simmons has the quality to take full advantage of the powerplay. Hetmyer has passed the fitness test and he will have a task at hand.

Pooran and Pollard were a bit rusty in the ODIs, but their skills can’t be undermined. Andre Russell’s inclusion has bolstered both the batting and bowling. In bowling, Kesrick Williams and Sheldon Cottrell are likely to lead the attack. Bravo’s tons of experience will also need to come to the fore. 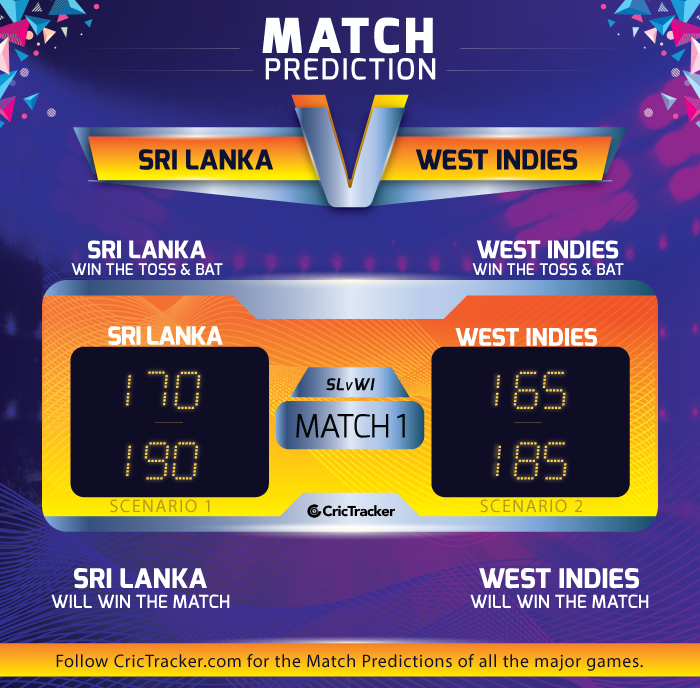