Another run-scoring fest is expected when both sides lock horns in Pallekele.

The third game of the three-match one-day international series between Sri Lanka and West Indies will be played at the Pallekele International Cricket Stadium in Pallekele.

The caravan of the West Indies tour of Sri Lanka continues with both sides set to lock horns in the third and final ODI of the three-match series. Sri Lanka has already won the series by taking an unassailable 2-0 lead in the three-match rubber thanks to whirlwind hundreds from Avishka Fernando [127] and Kusal Mendis [119] that spearheaded the island nation’s batting-unit to propel their target to 8/345 after 50 overs.

Chasing 346, the West Indies needed one of their top-3 to kick-on and get a really big score if they really were to give themselves any chance of making it close to the Sri Lankan total. The opening pair started well with Shai Hope- who racked up yet another half-century-  and Sunil Ambris putting up a 62-run-stand. But, once the likes of Hope and Ambris were dismissed, the middle-order was spun out by the duo of Lakshan Sandakan [3/57] and Wanindu Hasaranga [3/30]- both of whom claimed three apiece to bowl the Windies out for 184 in 39.1 overs.

Bright sunny spells followed by grey skies are expected to be the order of the day in Pallekele on Sunday if the weather reports are to be believed. According to the report, the temperature is set to fluctuate between 22-33 degrees Celsius while the humidity is set to hover around 59%. Chances of rain- 10℅

Another run-scoring fest is expected when both sides lock horns in Pallekele; a ground that has normally dished out flat batting surfaces. The ball might grip and turn as the game wears on but dew could play a substantial role in what the captains decide to do post the toss.

Average first innings score: 260 (Unaffected matches at the venue since 2015)

Will be updated if there’s any

Sri Lanka: Skipper Dimuth Karunaratne [53 runs in 2 games] and Avishka Fernando [177 runs in 2 games] have spearheaded the batting-unit by giving them ideal starts at the top of the order. Kusal Mendis scored a whirlwind hundred in the last game, and he along with the opening pair will once again hold the key for Lanka.

As far as bowling is concerned, the wrist-spin duo of Lakshan Sandakan and Wanindu Hasaranga have proved to be the difference between the two sides in the middle-overs. The pair claimed six wickets between them in the last game and will once again pose the biggest threat to the Windies batsmen.

West Indies: Barring Shai Hope [166 runs in 2 games], none of the batsmen have really fired for the West Indies in this series and they’ll hope that the likes of Darren Bravo, Roston Chase, Nicolas Pooran will come good in the final ODI.

Alzarri Joseph- 6 wickets at an average of 16.50- has been the pick of the bowlers for the visitors. Fabian Allen was ineffective during the middle-overs and with Sri Lanka playing two leg-spinners, the Windies may be tempted to play one of their own in Hayden Walsh. 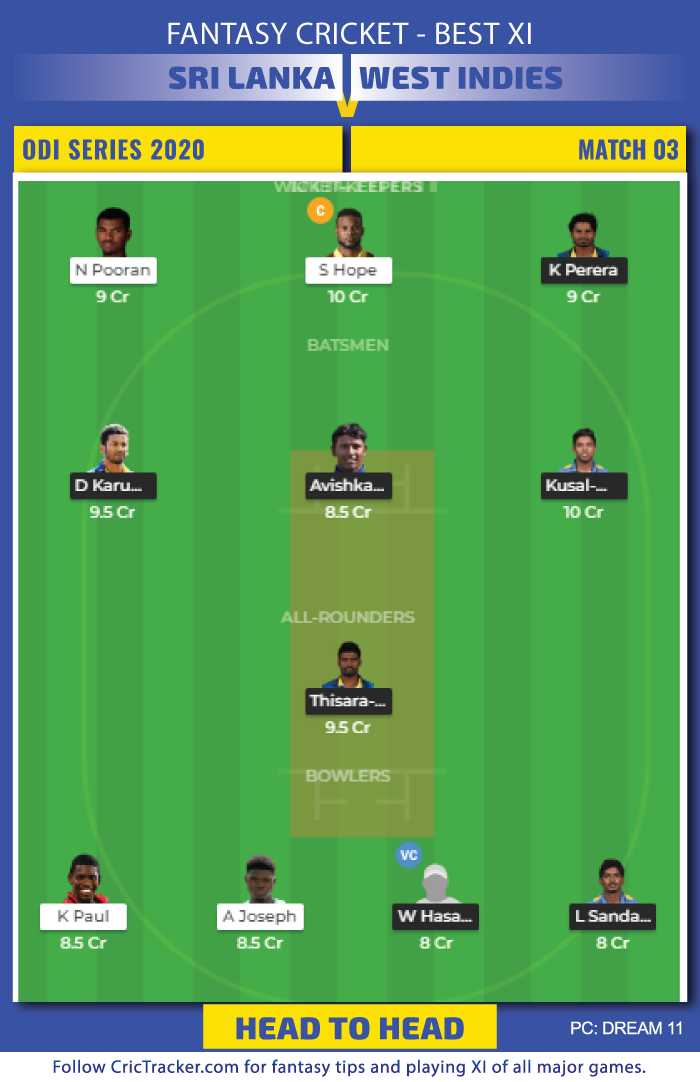 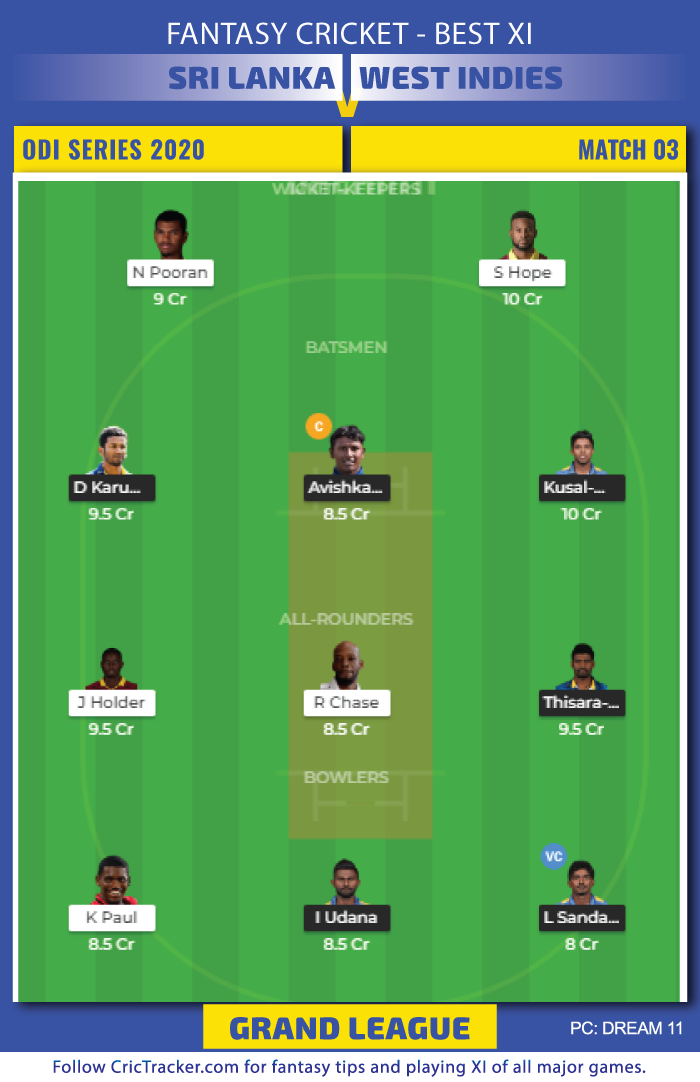 West Indies batsmen’s issues against spin- in particular, leg-spin- are well documented. And, it was once again exposed to the core as Sandakan and Hasaranga knocked over their middle-order. They will once again pose the biggest threat to the West Indies, and making either of them as captain/vice-captain could prove to be a game-changer for you.

Sri Lanka are expected to come out as winners.