10 out of 17 ODIs in Hambantota have gone in favour of the team, batting second.

Sri Lanka found themselves in dire straits in their opening ODI against the West Indies at the SSC in Colombo. With 27 runs needed and a couple of wickets in hand, the home team needed a hero to emerge in crisis. In the end, Wanindu Hasaranga’s 39-ball 42 got Lanka over the line by a solitary wicket. It also extended Lanka’s ODI winning-streak versus the Caribbean team at home to six.

The series now moves to Hambantota where the second game of the three-match series will be played at the Mahinda Rajapaksha International Stadium. It’s a must-win affair for Kieron Pollard and Co to stay alive in the series. But in order to do that, West Indies have to beat Sri Lanka in the latter’s backyard after August 2005. The next match is also expected to be a closely-fought affair.

The average score in ODIs in Hambantota is 288, suggesting that a high-scoring match is in the offing. The temperature will be around 28 and 31 degrees Celsius with the humidity between the 50s and 80s. In 17 completed ODIs, the chasing teams have won 10 times. Since it’s a night game, dew will also play a big part. Hence, sides would be better off batting second after winning the toss.

The Lankans may not make any changes to their lineup after the win. But they will wish for their batsmen to covert their starts. Skipper Dimuth Karunaratne, Avishka Fernando and Kusal Perera got into the 40s and 50s and perished thereafter. Even Kusal Mendis got out after getting a 25-ball 20.

Thisara Perera also threw his wicket away after getting 32. In bowling, Isuru Udana’s form is a bit of concern. Though he got three wickets, he was taken for 82 runs. The spinners, Hasaranga and Sandakan need to step up as well. Nuwan Pradeep was the Lankan’s most frugal bowler last time.

The Caribbeans also may stick to their same combination despite the defeat. In Evin Lewis and Shimron Hetmyer’s absence, Shai Hope’s role becomes an important one. The opener has been in great rhythm after his 140-ball 115. It’s also a chance for opener Sunil Ambris to make amends.

The middle-order has the calmness of Roston Chase and the brute force of Nicholas Pooran and Kieron Pollard. Keemo Paul may get a promotion after his 17-ball 32. He also got a couple of wickets in Colombo. West Indies will dearly wish for their premier pacer Cottrell to get his form back. 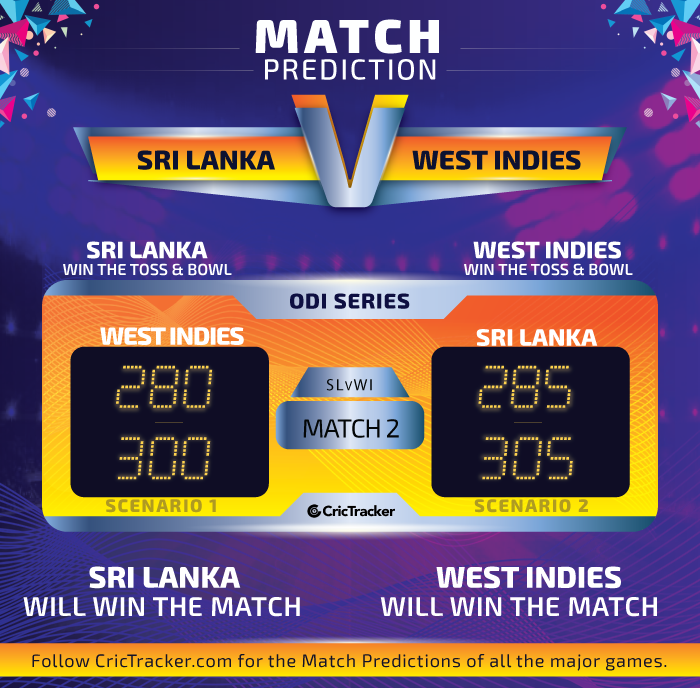