Lanka have beaten the Caribbeans in 10 out of their last 12 meetings in ODIs.

After running Sri Lanka close in Colombo, West Indies surrendered tamely in the second T20I in Hambantota, losing by 161 runs. Avishka Fernando and Kusal Mendis’ centuries turned out to be too hot to handle for the hapless-looking Caribbean unit. To add insult to injury, Kieron Pollard and Co also conceded an unassailable 2-0 lead in the three-match series with an encounter left in Pallekele.

In the last few years, Lanka have clearly dominated the Caribbean side. In their last 12 meetings in ODIs, the former has won 10 times. At home, Lanka have now beaten the West Indies in the last seven matches. Overall, Pallekele haven’t been a happy hunting ground for Lanka as they have won 10 out of 22 ODIs. For the visitors, it’s now about evading a whitewash and restoring some pride.

The pitch in Pallekele has been a good one for batting ever since the first ODI was played in 2011. In 24 matches, the average score is around 270, suggesting that it may again be a run-fest. Nine out of those 15 games were won by the team, batting second. The conditions will be a bit on the cloudy side with the temperature around 33 and 21 degrees Celsius. Dew is likely to play a major role.

The Lankans may resort to a couple of changes in the inconsequential game. Isuru Udana has looked a bit of colour and he can make way for Lahiru Kumara. Dasun Shanaka can be included in place of Thisara Perera, who has done reasonably. Lanka’s bowling has been a tough nut to crack thus far.

Wanindu Hasaranga has three wickets at an economy of 3.85. Pradeep, Sandakan and Udana have three wickets each as well. Most of their batting is in great rhythm. Fernando is the leading run-scorer with 177 runs. Karunaratne and Perera will be looking to make amends after failing last time.

The Caribbeans may also try out their bench strength in the upcoming match. Ambris floundered in both games and hence, Brandon King can be given an opportunity. The management can also try out Rovman Powell, who hasn’t played a game on comeback, but can destroy sides on his day.

Romario Shepherd is more than handy as an all-rounder and he can be drafted in. Alzarri Joseph has clearly been their standout bowler with six wickets at an economy of 4.95. In the batting department, barring Shai Hope, there have been very few contributions from the other batters. 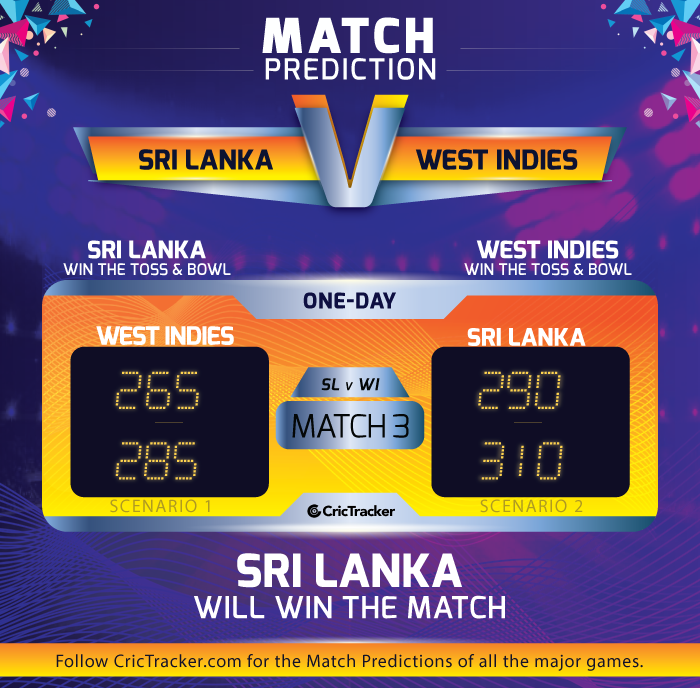