England Women will be facing Sri Lanka Women in a 3-match ODI series starting on Saturday. The England Women’s tour of Sri Lanka comprises of a 3-match ODI and T20I series that lasts over two weeks. This ODI series will be a crucial one for England Women who have underperformed in the ICC Women’s ODI Championship. England is currently placed at 5th position in the points table with six wins and six losses from 12 games.

The Heather Knight-led team will be hoping to continue their winning streak in Sri Lanka and move up in the Championship table. They won seven out of eight ODIs played in Sri Lanka with another game ending without a result. In fact, Sri Lanka has defeated England only once in Women’s ODI cricket. The Lankan Women sneaked through a 1-wicket win during the 2013 World Cup game which was played in India.

The first game of the 3-match ODI series between Sri Lanka Women and England Women will be hosted by the Mahinda Rajapaksa International Stadium in Hambantota.

Hambantota will be hosting a Women’s game for the first time. Generally, this venue is a high-scoring one during the Men’s one-day games. Totals over 240 can be expected if England bat first and around 200 if the Lankans bat first.

Lauren Winfield’s career has been upside down since being part of the England Women’s CWC winning team in 2017. She lost her opening spot and also been out of the team for a while. Sarah Taylor’s absence will give her a go at the No.3 position. Winfield had a couple of good knocks against India recently and scored an 82-ball 80 in the warm-up against Sri Lanka Emerging Women’s team. 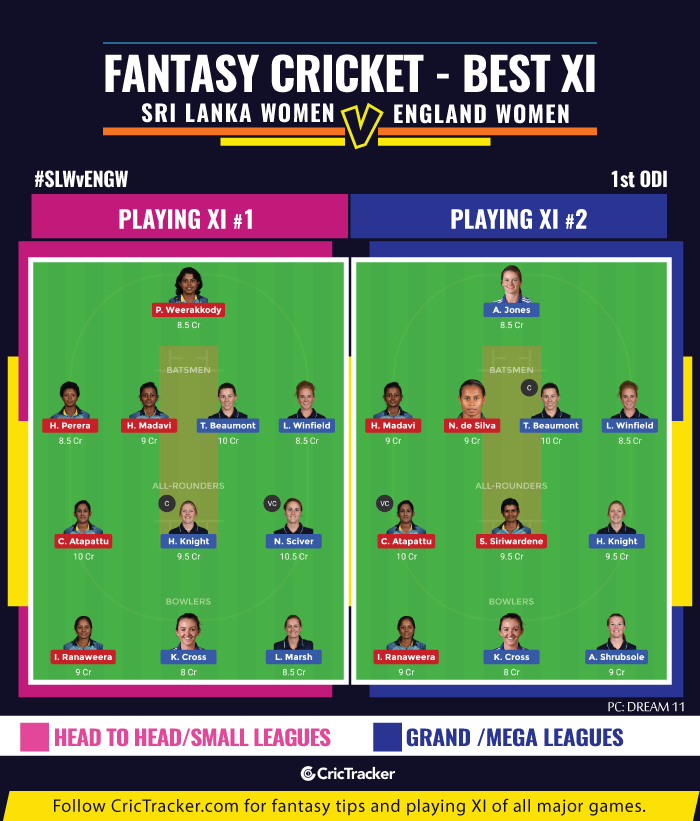 The all-rounders category consists of Heather Knight, Natalie Sciver, Chamari Atapattu and Shashikala Siriwardena. Knight’s consistency makes her a certain pick while Shashikala always contributes with both bat and ball. Atapattu, if scores, she scores big and also bowls a good amount of overs. Sciver does well in both departments or fails in both during the same game.

England Women are expected to take a 1-0 lead in the ODI series with a comfortable win over Sri Lanka Women.