Chasing teams have won just two games out of the six. 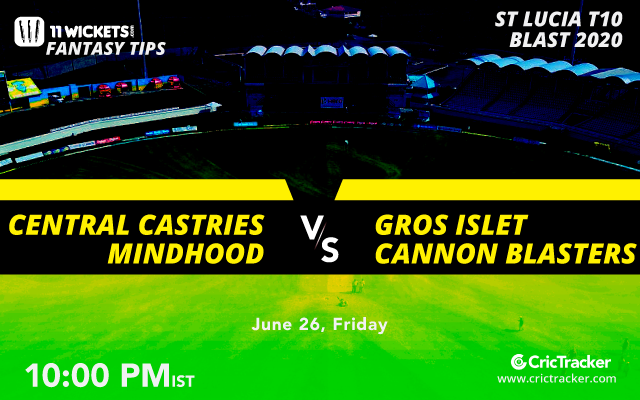 The 7th match in the St Lucia T10 Blast will be played between Gros Islet Cannon Blasters and Central Castries Mindhood at Darren Sammy International Stadium in St Lucia.

Only one game is completed thus far for Central Castries Mindhood. They defeated Babonneau Leatherbacks in that game by a big margin of 50 runs. CCM will aim to dominate GICB’s batsmen when they meet on Friday.

Gros Islet Cannon Blasters bagged a huge victory of 63 runs against Vieux Fort North Raiders in the lone game they have played thus far. For GICB, openers batted throughout 10 overs in the previous game and they are expected to do the same. Their bowlers are also in good form. It’s pretty tough to defeat the strong GICB team for CCM.

Weather will be hovering around 25 degrees in St Lucia. Whole match can be expected at the venue.

If you win the toss, it’s always perfect to go for batting. The average first innings score in the tournament is around 120. Batting first teams usually have a high scoring rate. In six matches thus far in the tournament, four times the team batting first has scored a total of 100 or more.

Jemmi Mauricette, though was benched in the first game, took a 5-wicket haul in just 2.3 overs in a club match on New Zealand soil in 2018.

Kimani Melius scored a century in the lone game he has played so far.

Kimani Melius’ explosive century will surely make us pick him as a multiplier.

Gros Islet Cannon Blasters is expected to win the match