The Raiders are expected to win this match. 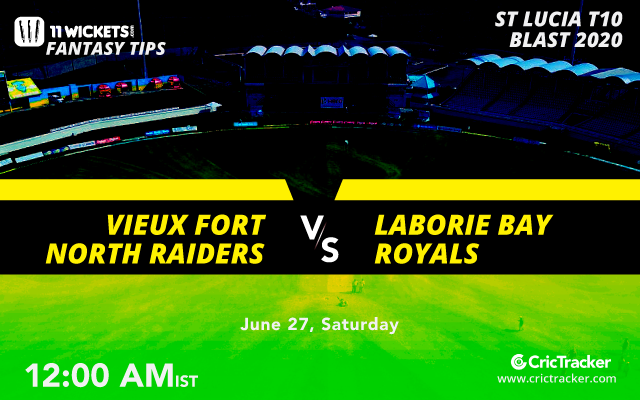 The 8th match of the 2020 St Lucia T10 Blast will be played between Laborie Bay Royals and Vieux Fort North Raiders at the Daren Sammy National Cricket Ground in Gros Islet, St Lucia.

Laborie Bay Royals will start their campaign on Friday in the ongoing St Lucia T10 Blast. In the match 8 of the tournament, they will face the Vieux Fort North Raiders who are coming off a huge 63-run defeat against the Gros Islet Cannon Blasters in their first game. The Raiders conceded 166 with the ball in 10 overs and will be seeking improvement in that department.

There is only 15% chance of rain during the match in St Lucia. The temperature will be in the early 30s.

Teams have been consistently scoring over 100 runs batting first and chasing has been expectedly tough. The team winning the toss should continue to bat first.

Jevin Isidore and Shem Paul were the impressive batsmen for the Raiders in their opening game. While the former scored 32 runs, Paul smashed a 23-ball 50* batting at four. Curtly Johnny and Ernell Sextius are the other players to have in the team. Denlle Anthony and Nick Andrew are two of the better batsmen from the Royals team. Edwin and Murlan Sammy are also must-haves in the team.

It would be wise to pick more players from Raiders’ team as they have played one match. There is not much information available about the Royals players.

Vieux Fort North Raiders are expected to win this match.