Darren Sammy and Johnson Charles will be featuring together for the first time in this tournament. 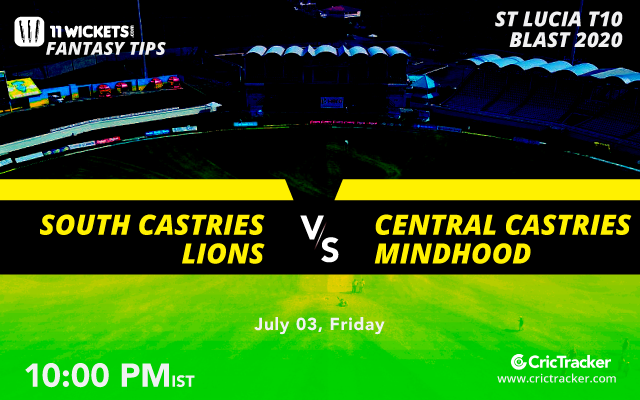 The 1st match of the Super Four stages in the St Lucia T10 Blast will be played between Central Castries Mindoo Heritage and South Castries Lions at Darren Sammy International Stadium in St Lucia.

The group stages of the tournament are done and dusted. It is time for the Super Four stages of what has been one exhilarating league this edition and the Central Castries Mindoo Heritage and South Castries Lions will be up against each other in the opening game of this stage. Both teams have an identical record in the tournament. having won three games and lost a game each. Both sides are well balanced with decent First-class and List-A experience on their side. This could be one tight contest between bat and ball.

Weather conditions in Gros Islet are expected to remain pleasant for cricket, but a bit cloudy. However, no rain interruptions are expected.

The track is well suited for batsmen and the bowlers could be up for a tough outing once again.

Alex Antoine chipped in with a half-century in the previous game and should be a top choice for captaincy. Darren Sammy and Johnson Charles bring in ton loads of international experience with them, which could come in handy for the South Castries. Stephen Naitram’s recent for makes him a top pick for both grand and small leagues.

Among the bowling options, Dillan John and Keygan Arnold have been picking wickets consistently and can be trusted to do a job here. Kester Charlermagne has picked up 6 wickets in the last four games, making him a must-have in the team.

Since the South Castries Lions have better individual talent, it would be preferred to have more players in the fantasy XI than the Central Castries.

South Castries Lions are expected to emerge win this fixture.