In their last meeting, the match had to be called off due to rain.

Both Perth Scorchers and Melbourne Stars started the ongoing BBL, being at the bottom half of the points table. However, as the tournament has progressed, both the teams have found momentum and are among the firm favourites to make the playoffs.

Ashton Turner’s Scorchers, having won seven out of their last eight matches, are in superb form and are at second in the points table. The Scorchers and Stars are now set to lock horns against each other in the second of Saturday’s doubleheader at the Melbourne Cricket Ground.

The Scorchers would be going into the game on the back of back-to-back wins. But at the MCG, the Stars are unbeaten this season. However, after being rolled over by the Melbourne Renegades, Glenn Maxwell and Co would be looking for redemption.

The pitch in Melbourne has been fairly good for batting. The track hasn’t shown many demons thus far in the tournament. But the track has shown signs of slowing down a wee bit in the second half of the games.

Hence, batting first should be the way forward for the teams. The temperature would be around the 28 degrees-Celsius mark with the humidity in the 40s. There are no chances of rain.

Playing Combinations for STA vs SCO

Glenn Maxwell has been a fulcrum of the Stars’ unit in the ongoing edition of the BBL. In 12 matches, the Victorian has 313 runs at an average and strike-rate of 31.30 and 142.92 respectively.

He likes to play his shots with any fear and the approach has paid dividends. He also has seven wickets to show for his efforts. If he gets going then the Scorchers, well and truly, could end up chasing leather.

Jason Roy joined the Scorchers in the middle of the tournament and his inclusion has bolstered the team’s batting to quite a large extent. In nine matches, the England batter has scored 257 runs at an average and strike-rate of 32.12 and 129.14 respectively.

Like Maxwell, Roy prefers to take the attack to the opposition. The Scorchers would be hoping that Roy gives them a brisk start in the powerplay. 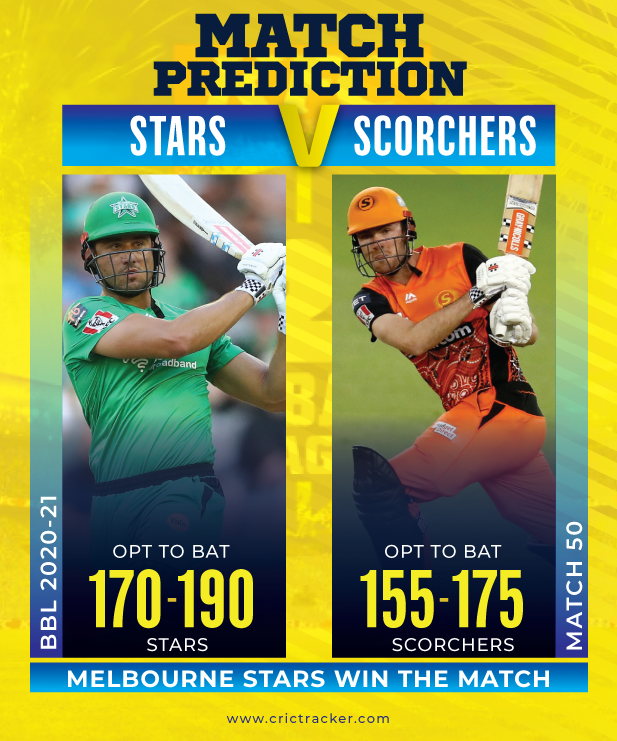