Melbourne Stars will be eliminated if Heat and Hurricanes win their respective encounters tomorrow.

The 56th and final league encounter will pit up the Melbourne Stars against the Sydney Sixers. The Sixers have had a dominant campaign, although they seem to have lost their way a bit and are coming to their final league clash with two consecutive defeats. Nevertheless, they sit at the second spot of the table with 8 wins in 13 fixtures and might climb to toe first spot depending upon their own and Perth Scorchers’ match result.

On the other hand are the Melbourne Stars, who have lost 7 out of their 13 encounters and occupy the second last spot with 24 points in their kitty. Not only do the Stars need to win this battle with all four points, but they will also need other results to follow. They stand eliminated if Brisbane Heat and Hobart Hurricanes win their respective encounters.

It would not be wrong to expect another high-scoring thriller with the toss playing a significant role in the result of the match. The last five completed encounters at the venue have witnessed four 170-plus scores, with the team batting first winning as many encounters.

Playing combinations for STA vs SIX

Adam Zampa has been the pick of the bowlers for Stars and has bagged 19 wickets in 11 games at an impressive economy rate of 7.13 with one five-wicket haul to his name. Given that this game will be the second one on the same day, Zampa’s leg-spin will be more than handy.

Josh Philippe, in 13 matches so far, has scored 453 runs at a magnificent strike rate of 150. He has three half-centuries to his name this season, one of which was 95. Having struck 51 fours, he is leading the chart of four-hitters in the 10th edition of the league. 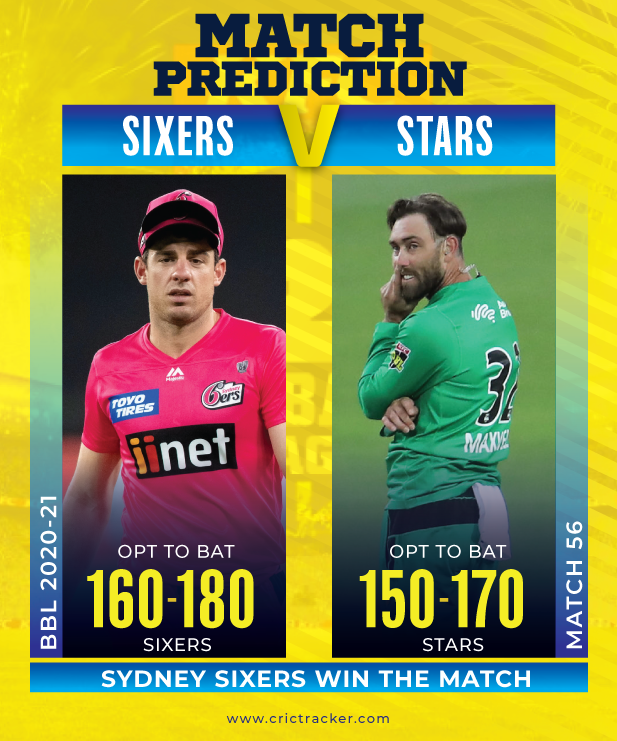