Virat has been on a record-churning spree in his career.

Virat Kohli has been scoring runs at will and with sheer authority ever since he forayed into international cricket. Back in 2009, the Delhi-born racked up his maiden ODI century versus Sri Lanka and has grown in stature with every match he played. It’s been more then a decade after his maiden appearance and he is slowly, but steadily carving himself as amongst the greats of the game.

His stupendous run at the highest level has also made the netizens draw his parallels with the legendary Sachin Tendulkar. The Master Blaster still holds the record of most ODI centuries (51), but Virat is only eight tons away from the colossal figures. Also, Sachin boasts of 100 centuries at the highest level. Virat has a chance of overtaking that humongous tally as well as he is on 69 tons.

Can Virat break Sachin’s records in the future?

Tendulkar retired from playing for India back in 2013 and even six years down the line, a number of his records remain unscathed. A couple of days ago, Virat turned 31 and it won’t be wrong in saying that he is on top of his game. He is also one of the fittest players going around and if he can keep up to his stupendous levels of fitness, he may even go on and play until the age of 37 to 38.

Virat is currently on a break as he isn’t playing the three-match T20I series versus Bangladesh. Virat will be back on the field of play in the two Tests against the Tigers in Indore and Kolkata respectively. At the end of 2014, Virat became the Test skipper after MS Dhoni hung his boots from the longest format. Then in January 2016, Kohli got the responsibility even in the ODI and T20I cricket.

In limited-overs cricket, Virat has mastered the art of chasing down mammoth totals. As he moves on in his career, Virat is expected to take down a number of records. The closer he gets to Sachin’s records, the more his comparisons will be drawn with the enigmatic Master Blaster. In our article, let’s make a comparison of Virat and Sachin’s international numbers on their 31st birthday. 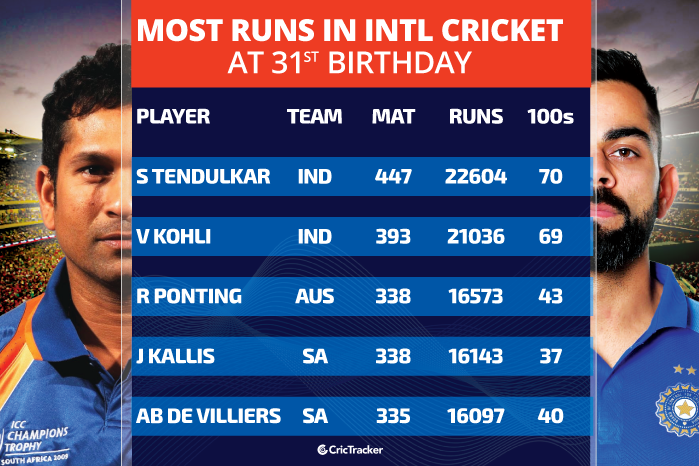