Nepal's Kushal Malla scored a 51-ball 50 on his ODI debut against the USA.

Kushal Malla of Nepal made his ODI debut a remarkable one by scoring a fifty to put his team on the top after the loss of early wickets. Kushal came into the playing XI after senior batsman Sharad Vesawkar caught up an injury. Malla walked to bat when Nepal were four down for only 47 and lost their 5th wicket at the score of 49 after a couple of overs. He then stitched on an 84-run stand with Binod Bhandari in only 14.3 overs for the 6th wicket.

Kushal scored 50 from only 51 balls with help of 4 fours and three maximums before getting dismissed. His aggressive knock was backed by Bhandari’s 59 as Nepal posted a solid total of 190. Kushal Malla was only 15 years and 340 days old on Saturday which makes him the youngest Men’s cricketer ever in International cricket to score a fifty. The previous youngest was his fellow countryman Rohit Kumar Paudel.

Rohit was only 16 years and 146 days old when he scored 55 in an ODI against UAE last year. Malla’s contribution in the game didn’t last with the bat as he came in as the 2nd change to bowl his left-arm spin. Kushal’s first over turned out to be a maiden over and in the 5th over, he cleaned up the 37-year-old Elmore Hutchinson. The USA all-rounder was almost 22 years elder to the debutant from Nepal

Only six players were younger by the time of their maiden wicket in Men’s International cricket. The new all-rounder from Nepal finished with figures of 10-1-30-1 as Nepal registered their maiden home ODI win by 35 runs. Kushal Malla is also the 5th youngest player in the history of International cricket (Men’s / Women’s) to score a fifty. The youngest is South Africa Women’s Johmari Logtenberg who was only 14 years and 166 days when she scored 74 on her Test debut against England in 2003.

Logtenberg scored 76 in an ODI next year against England when she was 15 years and 8 days to become the youngest player with a fifty in ODI format as well. Malla is 3rd on the list of youngest players to score an ODI fifty across Men’s and Women’s cricket as Sharmin Akhter scored 52 against Ireland Women in 2011 on her ODI debut at the age of 15 years and 330 days. 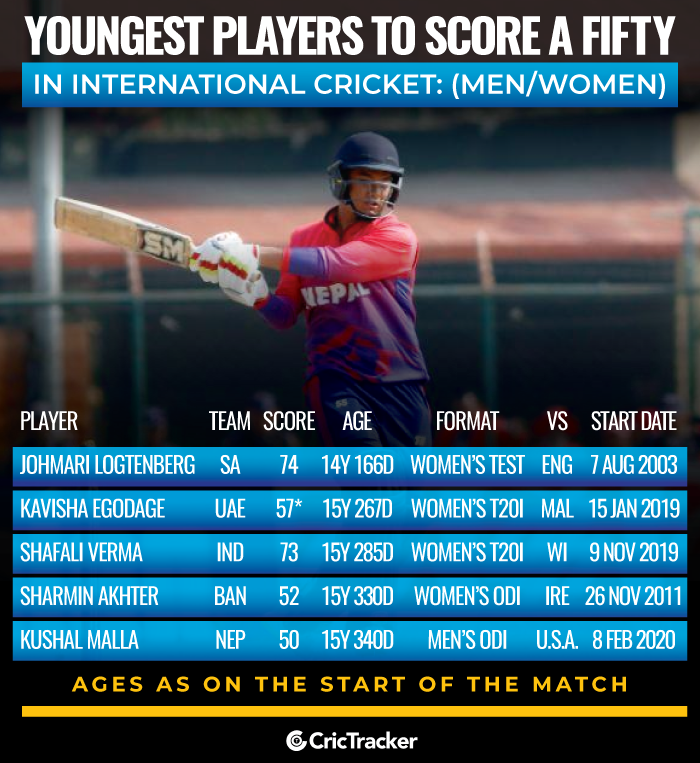