AB de Villiers hit three fours and five sixes during his 30-ball 59 in the opening game of the MSL T20.

AB de Villiers’ much-awaited comeback was a fruitful one for the fans as he struck a quick-fire half-century in the opening game of the Mzansi Super League game. However, the de Villiers-led Tshwane Spartans went down against Cape Town Blitz by 49 runs. Kyle Verreynee and Mohammad Nawaz’s maiden T20 fifties powered the Cape Town side to 180/4 in their 20 overs. Tshwane struggled in the chase as they were reduced to 27/2 by the 6th over.

De Villiers, who was playing his first professional cricket game since the IPL in May, took the responsibility of the chase. He added 43 runs for the 3rd wicket with Dean Elgar in five overs and 46 runs with Rilee Rossouw in only 4.1 overs. The former South African struck five sixes and three fours during his 30-ball 59. His reverse-sweep six was the best of the five he hit in the innings. ABD brought up his fifty in 27 deliveries which was his 4th consecutive fifty in Twenty20 cricket.

He scored three fifties in his last three innings during the IPL 2018. As a result, de Villiers became only the 2nd player from South Africa to hit four consecutive fifties in the T20 format. Rassie van der Dussen was the first South African to achieve this feat as he struck four in a row during the 2014 CSA Provisional T20 for North West. The first of the five sixes during this innings hit by AB was off Ferisco Adams over cow corner which was also his 300th in the shortest format.

Thus, AB de Villiers became the first South African and overall the 10th player to hit as many as 300 sixes in the Twenty20 cricket. Out of the previous nine players with 300 T20 sixes, four of them are from Windies. This shows the dominance of the players from the Caribbean in big-hitting lists. Three players from Australia are also part of this list while Brendon McCullum and Rohit Sharma are the only entries from their respective countries.

Players with 300+ sixes in Twenty20 cricket: 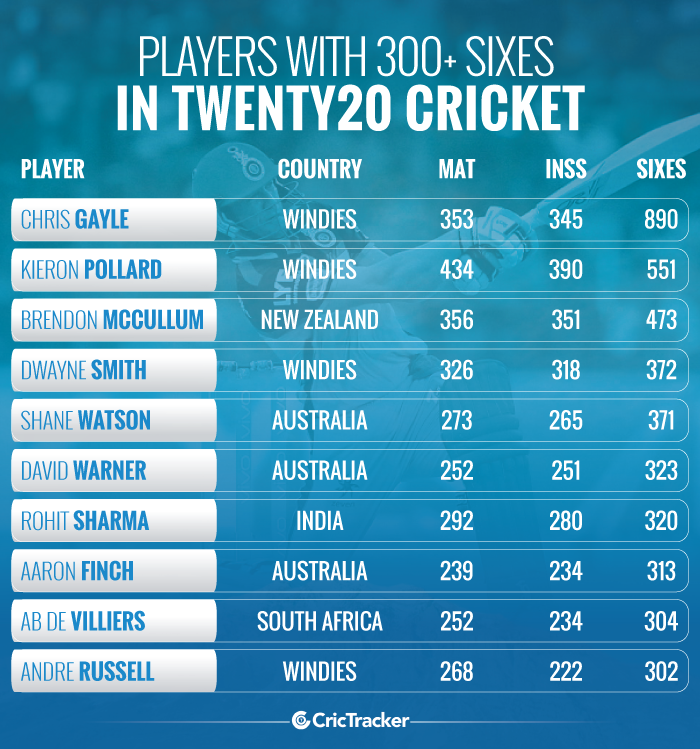