All the records and stats created by Abid Ali with his century in 2nd consecutive Test match.

Abid Ali carried on from his impressive Test debut as he scored 174 in the 2nd innings of the Karachi Test to put Pakistan in a commanding position against Sri Lanka. Abid scored an unbeaten 109 in the Rawalpindi Test to complete a unique double of scoring a century on Test and ODI debut. He got out for only 38 in the first innings of the Karachi Test stepped up at right time. He scored 174 in the 2nd innings and shared a 278-run opening partnership with Shan Masood after Pakistan conceded an 80-run first-innings lead.

All the records and stats created by Abid Ali with his century in 2nd consecutive Test match: 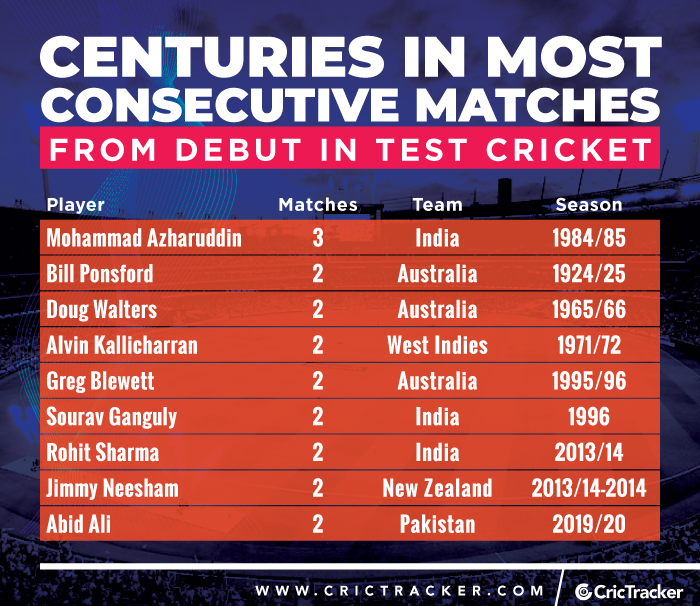 3 – Abid is only the 3rd Pakistan player to have two hundreds after two Test matches. Yasir Hameed scored twin centuries on his Test debut while Wajahatullah Wasti scored hundreds in both innings of his 2nd Test match.

278 – The partnership of 278 between Shan Masood and Abid Ali is now the 2nd highest opening stand for Pakistan in Test cricket. The highest is 298 by Aamer Sohail and Ijaz Ahmed against West Indies in the 1997 Karachi Test.

This is also the 3rd highest opening partnership in Test cricket in the team’s 2nd innings. Imrul Kayes and Tamim Iqbal put on 312 in the 2015 Khulna Test against Pakistan while Colin Cowdrey and Geoff Pullar added 290 against South Africa in 1960 The Oval Test.

321 – Abid had a Test batting average of 321 before getting dismissed in the 2nd innings of this Test. Only Lawrence Rowe (336) achieved a higher batting average in Test cricket than Abid. The previous highest Test average ever achieved by a Pakistan player was only 275 by Yasir Hameed.