The last of the other 14 players to score twin fifties in their final Test match was the former New Zealand skipper Stephen Fleming.

Alastair Cook made his final outing in International cricket a memorable one as he raked up fifties in both the innings in the ongoing Oval Test match. The England opener announced retirement from International cricket due to his recent failures as he had only one score in excess of fifty in the 13 Test innings this year. However, he recorded his highest score of the year when he made 71 in the first innings.

He scored yet another fifty in the second innings and crossed his first innings score as well and shared an unbeaten century stand for the 3rd wicket with skipper Joe Root. The 33-year-old thus joined a rare list of players to score fifty and more in both innings of their final Test match. Interestingly, Cook scored fifty and more in both innings on his Test debut in 2006 also against India. He made 60 in the first innings of the game played in Nagpur and bettered it with an unbeaten ton in the second innings.

As many as 38 players have scored twin fifties on Test debut while 15 who played more than one Test did the same in their final Test. However, Cook is only one of the two to feature in both the lists. South Africa’s Bruce Mitchell scored twin fifties on his debut and in his final Test both while playing against England. New Zealand’s Rodney Redmond scored 107 and 56 respectively on his Test debut which turned out to be the only Test match he ever played.

The last of the other 14 players to score twin fifties in their final Test match was the former New Zealand skipper Stephen Fleming when he faced England in 2008. Cook is the 4th England player with fifty-plus scores in both the innings of his final Test match. Andy Sandham, the first ever triple Test centurion, scored 50 in the 2nd innings to follow-up his record knock. It was incidentally the last match of his Test career as well. The other two England players to have achieved this feat are JDB Robertson and Vic Marks.

Players with twin fifties in their final match of Test career: 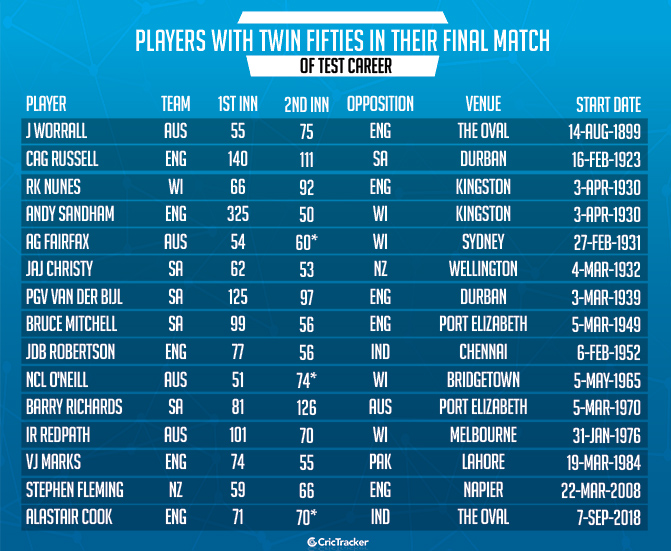