He completed 2000 runs in his ODI career when he reached 27.

Babar Azam has been amongst runs for Pakistan ever since his debut especially in the limited-overs cricket in a span where his team performed exceedingly well. The 23-year-old is considered to take Pakistan’s batting forward in the coming years and his record in the UAE is one of its kind. He began the 2018 Asia Cup with a solid 33-run knock chasing 117 against Hong Kong in their opening game. When on 27, Babar completed 2000 runs in his ODI career.

Thus, he became the joint second fastest to reach the milestone and the joint fastest among Pakistan players. Hashim Amla was the quickest to the feat taking only 40 innings. Zaheer Abbas was the quickest to 2000 runs in the format in 45 innings. The former England cricketer Kevin Pietersen also needed the same number of innings to amass 2000 runs.

Babar is also the joint second fastest to 1000 ODI runs taking 21 innings which stood as a record until Fakhar Zaman completed it in only 18 innings earlier this year. He had a realistic chance to better Pakistan record for fastest to 2000 ODI runs and even a chance of breaking the overall record. At end of 2018, the 23-year-old had 1758 runs to his name in the 50-overs format only in 35 outings.

Missed out on a world record

However, a poor series in New Zealand cut down his opportunity. Pakistan’s best number three collectively scored 31 runs across the five innings he played in the five-match ODI series. During the series in Zimbabwe, he had the least chance of scoring huge runs.

The opening pair of Fakhar Zaman and Imam-ul-Haq scored more than 2/3rd of team’s runs in that series. In the first game, Babar got out scoring 30 while he remained unbeaten on 29 and 19 in the next two matches coming to the crease when the Men in Green needed less than 100 runs to win. He didn’t bat in the fourth game but made use of the chance he got in the final tussle scoring an unbeaten 106 in just 76 deliveries to bring down the milestone 27 runs away. 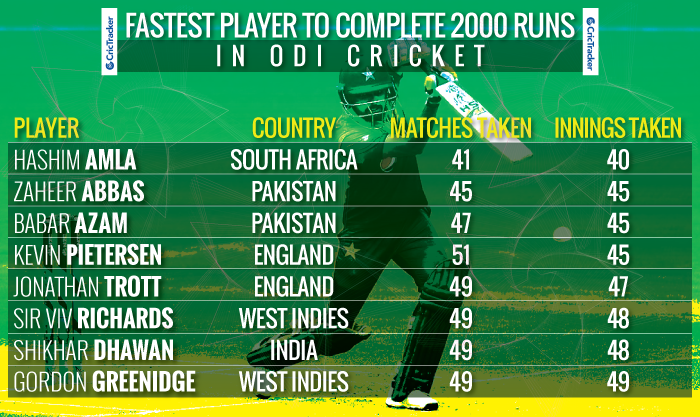