Since his last appearance in the whites for England, Bell hasn’t been consistent to make a case for his return.

Ian Bell’s name was once again heard during the ongoing Pataudi Trophy due to the recent struggles of England’s middle-order batsmen. The hosts’ top six have been outplayed by their bottom five comfortably against India and there were calls of roping in the experience of Bell. During the fourth Test in Southampton, the Brits were four down for 36 and 92 respectively. At the same time, the 36-year-old notched up a double century in first-class cricket.

The Warwickshire batsman has managed to put a humongous amount of runs under his belt scoring 883 runs in the County Championship thus far at a rich average of 58.87. He has scored four centuries in the 18 innings he batted in the competition as of now including a 204 last week. In fact, Bell has been even more dangerous to the opponents in the limited-overs formats due to his reading and approach towards the match situations.

Since his last appearance in the whites for England, Bell hasn’t been consistent to make a case for his return. He managed to score 2315 runs in first-class cricket in the last three seasons at a moderate average of 37.95. Across 2016 and 2017, the 36-year-old could score only one century but has already scored five in the ongoing 2018 season. Across all FC matches in 2018, Bell has 989 runs to his name at an average of 61.44.

The bulk of his runs in this county championship have come against the Glamorgan team who have won only one game this year and are laying at bottom of the table. Bell scored centuries in each of the three innings he batted against them at an unreal average of 425. However, against the remaining counties, Bell managed only 458 runs in 15 innings at a below-par average of 32.71 with only three fifty-plus scores.

Ian Bell in the County Championship 2018: 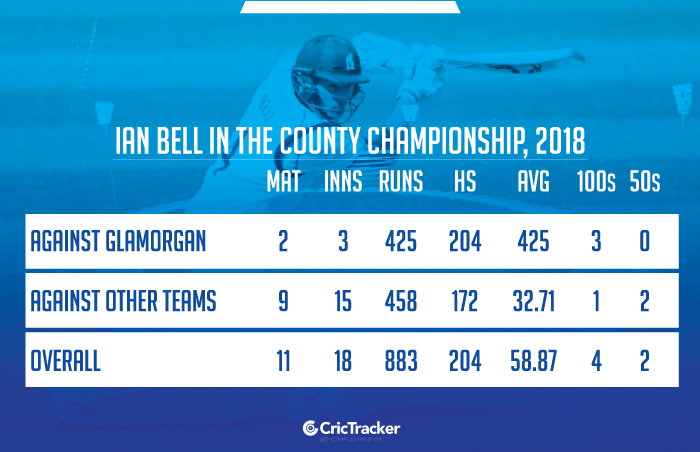