Here are all the major stats and numbers that Dwayne Bravo recorded during his Twenty20 career.

Dwayne Bravo has been a successful cricketer where ever he played in the Twenty20 format over the last 14 years. Playing in his career’s 459th T20 match on Wednesday, the all-rounder from Trinidad, completed 500 wickets in the format by dismissing Rahkeem Cornwall at his home ground, the Queen’s Park Oval in Port of Spain. Bravo, playing for the Trinbago Knight Riders, had figures of 3-0-7-2 against the St Lucia Zouks before the rain interval.

Here are all the major stats and numbers that Dwayne Bravo recorded during his Twenty20 career: 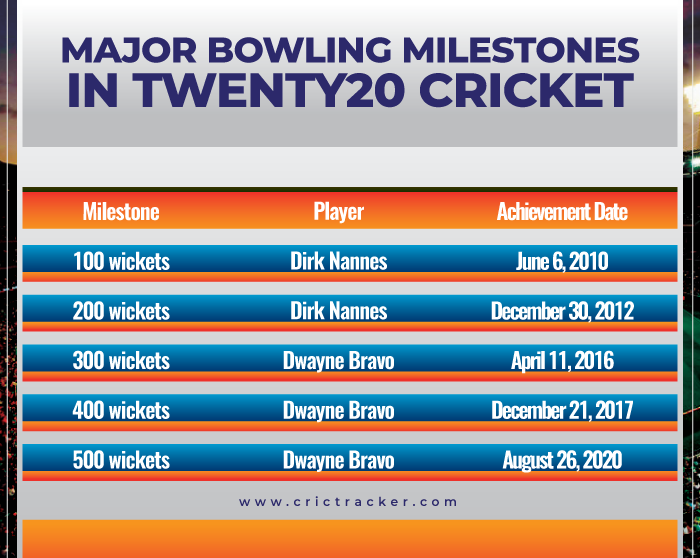 8 – The wicket of Rahkeem Cornwall was also the 100th wicket for Dwayne Bravo in the Caribbean Premier League. Bravo became the first player to complete 100 wickets in the CPL as well. The CPL is now the 6th franchise league/T20 competition where at least one player took 100+ wickets.

9 – Bravo got the wicket of Kieron Pollard on nine occasions in this format; the most number of times a bowler has dismissed a batsman in T20 cricket.

32 – Dwayne Bravo’s 32 wickets during the 2013 edition of IPL are the 2nd most number of wickets by a player in a Twenty20 series/tournament. Alfonso Thomas bagged 33 wickets during the English T20 competition in the 2010 season.

50 – Bravo’s 2nd wicket (Roston Chase) in the ongoing CPL game became his 50th scalp in the Twenty20 format at the Queen’s Park Oval. This is the first venue where Bravo claimed 50+ wickets in the Twenty20s. The 49 T20 wickets at Chennai’s Chepauk stadium were the most for Bravo before this tournament.

100 – CPL is the 2nd T20 competition where Bravo achieved the milestone of 100 wickets. He has already picked up 147 wickets in the Indian Premier League. Bravo is now also the first player to bag 100+ wickets in two different T20 competitions. 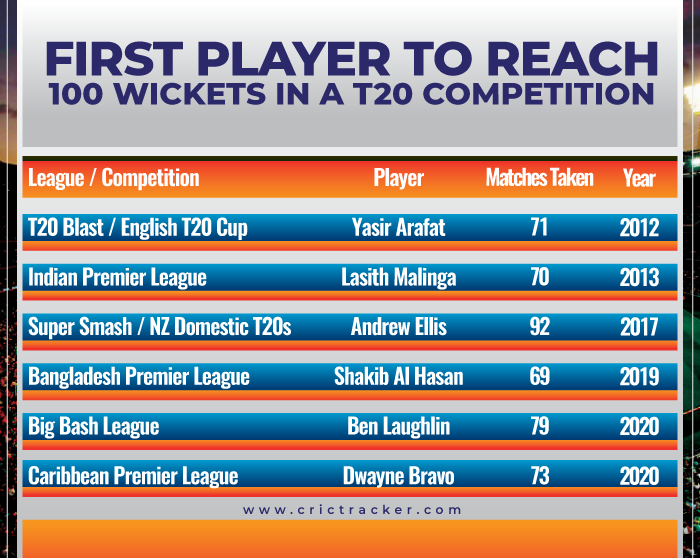 500 – The first players to claim 500 wickets in first-class cricket and List A cricket were William Lillywhite (in 1837) and John Lever (in 1983). Courtney Walsh (in 2001) and Wasim Akram (in 2003) became the firsts to reach 500 wickets in Test cricket and ODI cricket respectively. Interestingly, Walsh also got his milestone 500th Test wicket at the Queen’s Park Oval in Port of Spain.

Walsh and Bravo got their 500th wickets at Queen's Park Oval. #CPL2020 #TKRvSLZ