South Africa scored as many as 174 runs in the last 15 overs of their innings.

Faf du Plessis and David Miller put on a record-breaking partnership in the deciding game of the three-match ODI series against Australia. The Aussies elected to field in the final ODI in Hobart and dismissed the visiting team’s top three for the score of 55. But skipper Faf ensured he batted as long as possible along with Miller, who walked in at No.5. The duo rescued Saffers in the previous ODI as well where they shared a 74-run partnership for the 5th wicket but couldn’t take their team home.

However, the pair ensured South Africa posted a big total this time. The last 15 overs changed the course of the game as the Proteas scored as many as 174 runs. Both the batsmen brought up their fifties in the 36th over and started to cut loose by hitting boundaries. Faf brought up his century in 105 deliveries during the 46th over while Miller reached three figures in the very next over in only 95 balls.

The pair added 252 runs in only 33.1 overs before Faf got out in the penultimate over. The South African captain scored 125 off 114 balls with 15 fours and two sixes. Miller too got out in the final over but not before a 108-ball 139 which came via 13 fours and four maximums. This partnership helped South Africa make their first 300+ total in ODI cricket against Australia in the latter’s own backyard as they finished on 320/5.

Highest partnerships for the 4th wicket in ODI cricket: 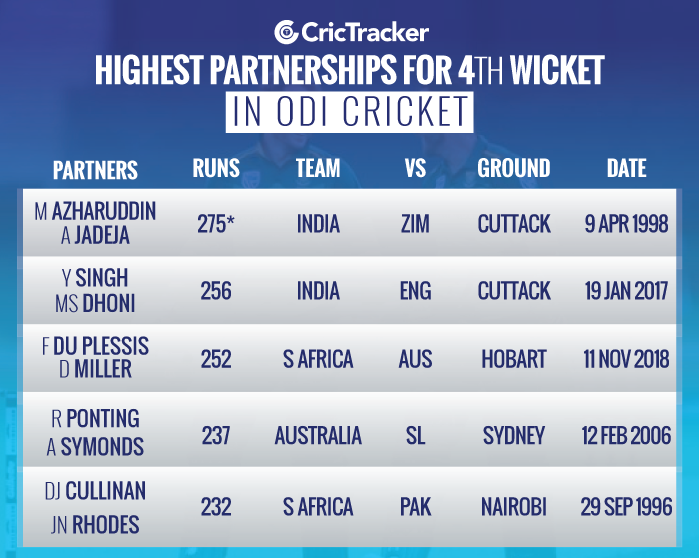 The partnership of 252 runs between Faf and Miller is the 3rd highest partnership in ODI cricket for the 4th wicket. The top two partnerships for this wicket in ODI format are recorded by Indian pairs that too at Cuttack Stadium. Mohammad Azharuddin and Ajay Jadeja added an unbeaten 275 against Zimbabwe in 1998 while Yuvraj Singh and MS Dhoni put on 256 against England in 2017.

This is also the 3rd highest partnership of South Africa for any wicket in ODI format. All the top six ODI partnerships of the Proteas have been recorded since the start of 2015. Overall, this 252-run stand is the highest for any wicket in ODIs against Australia surpassing the Sri Lankan pair Marvan Atapattu and Sanath Jayasuriya’s 237-run opening stand in the 2003 Sydney ODI. 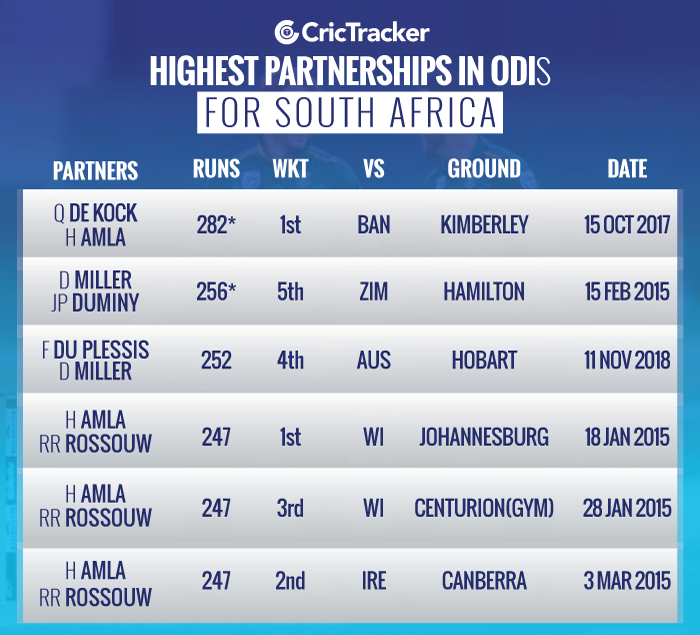