Kagiso Rabada is the newest entrant to this list.

The 13th edition of the Indian Premier League (IPL) is being played in UAE across three venues namely Dubai, Abu Dhabi and Sharjah. The T20 extravaganza is serving enough entertainment for the audience with thrilling encounters between the players and teams. In a game that favours batsmen a little more, it is encouraging to see the bowlers stepping up and winning matches for their teams.

Reaching the incredible mark of 50 wickets in the cash-rich league is a big achievement for any bowler. Many have achieved this feat in the history of the league and South African pacer Kagiso Rabada is the new addition to this list. Rather, Rabada has reached the milestone in the least number of innings.

In the match against CSK in Sharjah, the Delhi Capitals’ Rabada dismissed his counterpart Faf du Plessis as his 50th wicket. The pacer reached the feat in just 27 fixtures while maintaining an economy of 7.97 and average of 16.3.

The second name in this chart is of Kolkata Knight Riders’ (KKR) Sunil Narine who had achieved this feat in 32 matches. In his IPL career of 9 years, the Trinidadian cricketer has 127 scalps to his name in 116 games at an economy of 6.74 and average of 23.8. Narine is followed by Mumbai Indians’ Lasith Malinga who took his first 50 wickets in 33 games. Malinga has featured in 122 games taking 170 scalps and is not playing the ongoing season.

The newest entrant, Kagiso Rabada, however, has gone past them quite comfortably as he has also not gone wicketless in an IPL innings since 2017. DC will be hoping for him to continue in the same way for the rest of the season.

Fastest bowlers to 50 wickets in IPL: 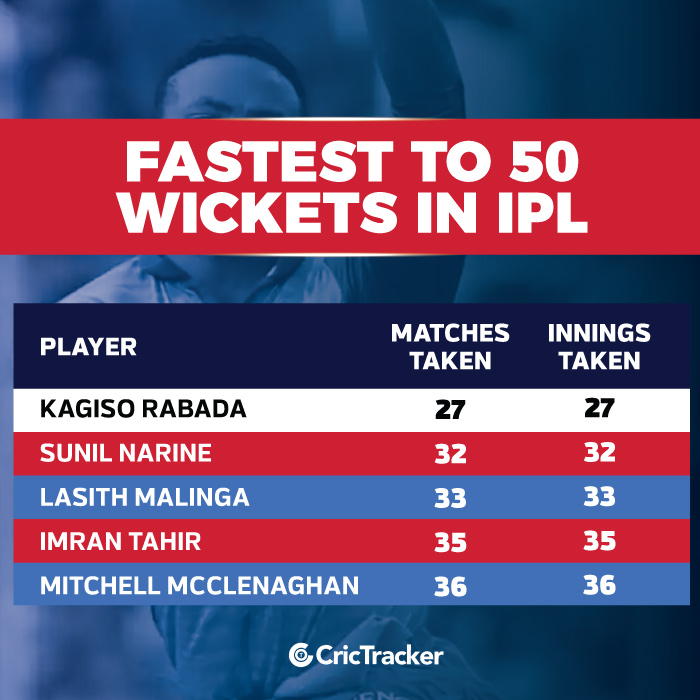