Smriti Mandhana was adjudged as the player of the match for her 69 off 41 balls against the Melbourne Stars.

Harmanpreet Kaur and Smriti Mandhana, the India Women’s T20I captain and vice-captain went ballistic in their respective Women’s Big Bash League (WBBL) matches on Sunday. First, it was Mandhana who guided her team Hobart Hurricanes to a huge win against Melbourne Stars with a 24-ball fifty. Nearly five hours after Mandhana’s knock, her T20I captain Harmanpreet came up with a 23-ball fifty for Sydney Thunder against Brisbane Heat. Kaur struck six fours and two sixes during her 26-ball 56 and powered Sydney Thunder to 192/4 in 20 overs.

Harmanpreet walked in to bat after the openers departed on consecutive deliveries in the 11th over. The dashing Indian batswoman added 41 for the 3rd wicket with Naomi Stalenberg in 28 balls. The Thunder’s skipper Alex Blackwell made an unbeaten 33 off 18 balls and shared a 53-run stand with Kaur for the 4th wicket in only 27 balls. Earlier, Mandhana struck 69 off 41 deliveries by hitting 13 fours as the Hurricanes went on to record their highest total and the 3rd highest in the WBBL of 196/6.

Hobart ended up registering their biggest win by a 72-run margin as they bowled out Melbourne Stars to 124 in 16.5 overs. Mandhana began her innings with a boundary on the first ball she faced. After an early wicket, she put on a crucial partnership with Hayley Matthews to take things forward.

When on 37, Mandhana hit Makinley Blows for hat-trick boundaries in the 9th over. The third ball was a no-ball allowing the left-hander to complete her fifty on a free-hit delivery. Smriti raised her fifty in only 24 balls with 44 of those 50 runs coming via boundaries (11 fours).

The duo put on a 98-run stand for the second wicket in only 8.5 overs before Matthews twisted her knee and failed to get back to her crease in the follow through of Mandhana’s straight hit. Hobart failed to get going after this stand as even Mandhana struggled to find the gaps. She was dropped twice in two balls when in the 60s but failed to make it count as she scored 19 runs in 17 balls before getting out. The 23 runs in the last eight balls helped Hurricanes finish close to 200.

The two fifties by the Indian players find a place in the fastest fifties in Women’s BBL history. Kaur’s 23-ball fifty is the 3rd fastest while Mandhana’s 24-ball fifty is the 4th quickest. The fastest in the tournament came off 22 deliveries by Ashleigh Gardner and Lizelle Lee both in the last season’s game between Sixes and Stars. Three of the top six fastest fifties in the WBBL were recorded by Sydney Sixers’ players. 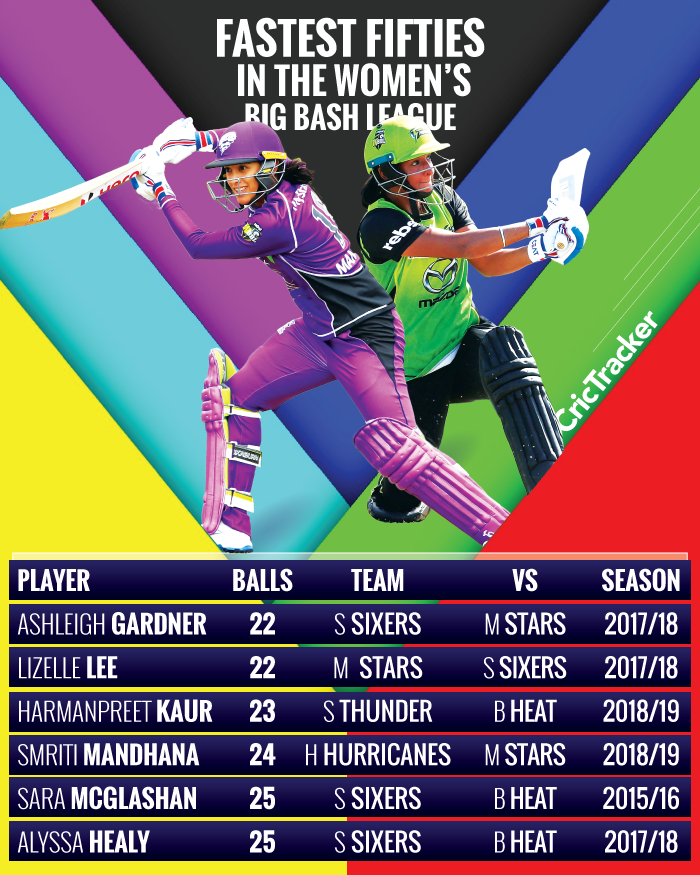