Stats: Here's how Virat Kohli's batting average has varied with each Test

Stats: Here’s how Virat Kohli’s batting average has varied with each Test

Virat Kohli's Test average has dropped down below 50 for the first time since 2017.

Former Indian skipper Virat Kohli returned with scores of 23 and 13 in the ongoing second Test match between India and Sri Lanka in Bengaluru. This brought his Test average down below 50 for the very first time since 2017. Kohli is certainly going through a rough patch as runs have dried up for him. In fact, his last international ton was recorded way back in November 2019. While his overall Test numbers are still impresssive, he has been far away from his best lately.

Meanwhile, Kohli made his Test debut against West Indies at Kingston in Jamaica 11 years back in the year 2011. The star batter has played 101 Tests for his country so far and amassed 8043 runs. In 171 innings, the right-handed batter has smashed 27 centuries and 28 fifties in Test cricket with an average of 49.95. Kohli has smashed seven double centuries with his highest score being 254 not out.

Virat has appeared in 46 matches in India, scoring 3847 runs with an impressive average of 61.06 and 13 centuries. In away Tests, Kohli has amassed 4139 runs in 54 matches with an average of 43.11 and 14 hundred. In one neutral match last year against New Zealand in the World Test Championship final in England, Kohli scored at an average of 28.50. The 33-year-old’s average first touched the 50 mark in his 52nd Test appearance against England in the Mumbai Test in the year 2016. His average after the match read as 50.53 with 4194 runs in 89 innings.

Since then, Kohli’s average has never dropped below 49 with the star batter mustering 3849 runs in 49 Test matches including 12 centuries with an average of 49.34 in this period. Virat achieved the highest average of 55.10 in his Test career when he slammed an unbeaten 254 runs against South Africa in Pune in 2019. Overall, Kohli has the fourth-best average amongst the Indians who have played a minimum of 50 Tests matches which is 49.95. Only legendary batters Sachin Tendulkar (53.78), Rahul Dravid (52.63), and Sunil Gavaskar (51.12) are ahead of him.

Overall, Virat is 11th on the list for all-time highest rankings in Test cricket. With a rating of 937 points, Kohli is the Indian with the best rankings of all time. Amongst the Asians, he is second only behind former Sri Lanka’s consistent batter Kumar Sangakkara. The Lankan legend is eighth in the chart with a rating of 938 points. The next Asian on the list is Pakistan’s Mohammad Yousuf with 933 rating points on number 16th.

After the completion of Virat’s 61st Test match against Sri Lanka in Kolkata in 2017, his average was 50.12. Since then, his average never fell down below 50 for a record 39 Test matches. After the first Test of the ongoing series with Sri Lanka, which was Virat’s 100th Test, his average read as 50.35. It’s the first time in 40 matches, Virat has seen his Test average falling below 50 that is 49.95.

For all this period, the run-machine Kohli has maintained a terrific consistency in the longest format of the game to see his average always around 50 mark. One of the greatest players to wear the Whites, Virat also completed the landmark of 8000 Test runs in his milestone 100th Test match. 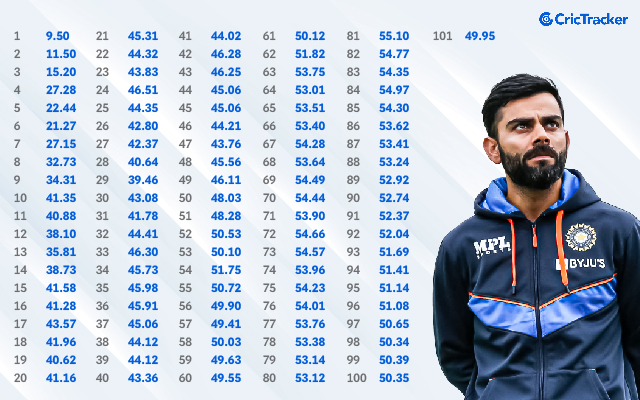